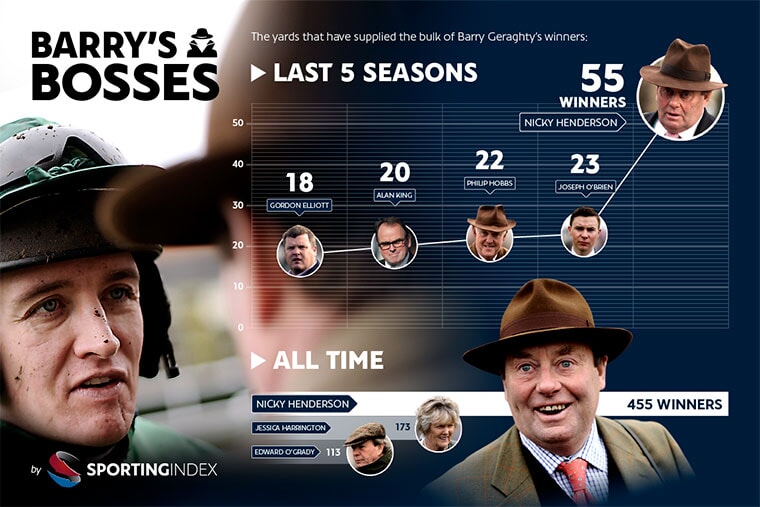 450 winners and counting for Nicky

The first horse I rode for Nicky [Henderson] was Geos in January 2000 at Leopardstown. We finished second and he was pleased enough with that. It was a pleasure to meet him and to ride for him and just a few months later I rode Regal Exit in the Triumph Hurdle. Again, we finished runner-up but I was on the second string so that was a pretty good result.

I continued to get the odd ride for him over the next couple of years, particularly at the big meetings where I could do a light weight and often ride the second string, but it wasn’t until 2004 that I had my first significant win for him with Isio in the Vodafone Gold Cup (now the Greatwood Gold Cup). The next few years were a bit sporadic, as I was mainly riding in Ireland and Marcus Foley was well-established as Nicky’s second jockey.

In 2008 I rode Punjabi in the Champion Hurdle, finishing third, and then went on to get the ride on him in the Irish Champion Hurdle at Punchestown too as Fitzy [Mick Fitzgerald] had suffered a career-ending injury in the National, so I guess that’s what put me in a position for the job. Nicky and I had a good chat at the Land Rover sale in Ireland that summer and agreed that we’d look to make things work, with me commuting over from Ireland to ride for him on a regular basis. 2008/09 would have been my first full season for Nicky and it was a good one, winning the Long Walk, the Ascot Hurdle, the Fighting Fifth and then both the Champion and Triumph Hurdle at Cheltenham.

It felt like it was doubles and trebles most Saturdays and I was really enjoying the job. For the next few seasons everything went brilliantly. The quality Nicky had in the yard was great. Of a morning, there would be maybe 60 odd horses to school and you’re moving from one aeroplane to another: Sprinter Sacre, Finian’s Rainbow, Simonsig, Riverside Theatre, Bobs Worth. I had to pinch myself at times. Then when AP [McCoy] retired it left the door open with JP [McManus], and that offered me the opportunity to race a bit more in Ireland, which I hadn’t been able to do for seven years.

The chance to spend more time in Ireland and not needing to commute as much was very appealing, especially as it meant I’d still be riding certain horses for Nicky. The connection with Nicky is still very strong of course and it was great to ride three winners for him at Cheltenham this year.

Plenty of good times with Jessie and Edward

Along with Nicky, Jessie [Harrington] is one of the few other trainers who can have winners at the top-level right across the board. Whether it be the Gold Cup, Champion Hurdle, Champion Chase or Ascot, she does the lot. I was based with Noel Meade when one of my first rides for Jessie came about, winning aboard Market Lass when claiming 5lbs in 1997 and I’ve ridden a lot for her ever since. Moscow Flyer is the one a lot of people will associate us with.

He came along in 1999, providing me with a first Grade 1 victory and was the horse of a lifetime. Almost 15 years on from that and then there’s horses like Jezki, while Jessie’s recent wins in Group 1s on the Flat just goes to show how good she is. The other trainer I used to ride a lot for, who doesn’t have the type of firepower he once had anymore, is Edward O’Grady.

He was the top dog as Irish Trainers went at Cheltenham in the 90s and we had plenty of success early on. I rode for him from 1998 and had a good winner at Cheltenham for him on Sky’s The Limit. Norman Williamson was riding most of his, so when he finished up in 2003 I got a lot of rides for Edward and that meant plenty of winners!

The difference since taking on the job for JP is that I’m now riding for a lot of different trainers. Nicky is still my number one source of winners, but trainers like Joseph O’Brien have also supplied me with plenty of good chances in Ireland recently. I rode Ivanovich Gorbatov to win the 2016 Triumph Hurdle, which although it was under Aidan’s name was very much Joseph’s first Cheltenham winner, and I suppose that’s where it all started with him. He’s been brilliant ever since and continues to go from strength-to-strength. I’m sure he is destined for even bigger things in the futurand it’s great to be riding for him.

As you can imagine with where he comes from, his attention to detail is amazing and the improvement he can find in horses is unbelievable. In the past, I would never of ridden for Philip Hobbs. He’s always used his own jockeys and I’ve never really had an association with him, but he’s somebody I’ve really loved riding for recently. He’s a lovely man to ride for and is very uncomplicated. He keeps things simple, doesn’t look for excuses and knows his horses very well. I’ve had a fair bit of success with Alan King in recent years too, with the likes of Yanworth, and I remember my first ride for him in the National on Call It A Day way back in 2000.

You know where you stand with Alan and he’s a good man to ride for too. Gordon [Elliot] is the other one who’s given me some good chances over the last few years. I’ve had a close connection with Gordon for a long time. We grew up together as teenagers and I’ve always been close to the yard. Sire Du Berlais has been the standout horse for us recently and it was great to win again on him at Cheltenham this year.

Still, though, Nicky is the one that provides me with the most firepower and I don’t think there’s a trainer that can prepare a horse better for the big day than him. He’s done it a thousand times and the most recent effort with Epatante was fantastic. The way he found improvement in her from Christmas to Cheltenham and prepared her for the Champion Hurdle was second to none.

We look back at previous postponements from the history of football, amid the current pandemic...
Read more
Tweets by sportingindex