In pole position after Pertemps win

Sire Du Berlais was brilliant in the Pertemps yesterday.

The first-time blinkers worked really well for him, he crept into the race well and it was a cracking performance under top-weight.

That's four wins now but you don't want to be counting your chickens just yet.

Dicky Johnson had four winners in 2003 and I came and done him in the last race, so you never know. 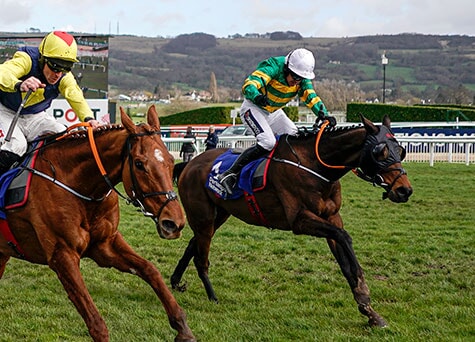 I kick off the final day of the Festival with A Wave Of The Sea in what looks a very strong renewal of the Triumph Hurdle (1.50pm).

He did well last time to win, going past Cerberus late after Aspire Tower came down at the last.

Cerberus looked like he had done enough but then my fella ran on late - it was a bit like Champ!

Aspire Tower ran below his best that day and would be the strongest of the Irish challenge.

He looks like going toe-to-toe with Allmankind from flag-fall and that could leave the door open for something else.

Allmankind has looked great all season, Solo was impressive last time, but that form is still questionable, and Goshen is also an exciting horse.

I'd probably say Allmankind has the best form in the book of those in the UK and he comes here fresh.

I've then got Saint Roi in the County Hurdle (2.10pm). He won a maiden last time and arrives here in good form.

I know Willie [Mullins] is pleased with the way he's coming along, but this is a big step up in company.

He's got a shot but a lot of other yards will be thinking the same about theirs.

Sweet on Lostintranslation for Gold Cup

The Albert Bartlett often throws up a big-price winner and that tends to be because the classier horses struggle with the test of stamina.

Three miles around here on the New Course takes a lot of getting and it suits the battle-hardened horses.

Latest Exhibition will like it, while Thyme Hill is a horse I love too.

Even though he's one of the classy sorts in the race, I think he stays well too and I'm quite sweet on him.

Last year's Gold Cup was a cracker and it's just as good if not better this year.

Al Boum Photo still has a big chance of retaining his crown.

Willie's given him the same prep and it's all been focused around this race.

I know Nicky [Henderson] is happy with Santini and he's been schooling well but I'd be sweeter on him if the ground wasn't drying out.

Given the likely conditions, I think Lostintranslation will run a big race.

I loved him as a novice and hopefully the wind op since the King George has done the trick.

I'll then be cheering on Minella Rocco in the Foxhunters.

He looks like he's bounced back to some of his old form and he usually enjoys himself around Cheltenham.

The Grand Annual is wide-open, but I'd expect a big run from Chosen Mate.

There's been some good vibes from the yard around him.

The Martin Pipe is a chance to see the sport's up-and-coming jockeys.

Jonjo O'Neill is a proven rider at the top level and no doubt has a chance with Great View.

Of those from Ireland, I like both Darragh O'Keeffe, who rides Ilikedwayurthinkin, and Sean O'Keeffe, who's on The Bosses Oscar - they're both worth keeping an eye on.

France lead the way in the Six Nations but England & Ireland are close on their heels. All the big talking points so far...
Read more
Tweets by sportingindex