Getting into the swing

With Newbury on Thursday and then the November Meeting at Cheltenham next week, it really feels like we’re getting into the season now.

All the better horses are starting to come out and I’m really looking forward to Champ making his debut over fences in the beginners' chase (2:05pm).

He was a high-class novice hurdler, winning two Grade 1s, with his only defeat of last season coming at Cheltenham, which in itself was a good run.

I schooled him over fences at Chepstow last week and he did it very well. He gave me a great feel and I couldn’t be any happier with him going into the race.

At home he’s maybe been a little bit over-eager, but Nicky [Henderson] is a great trainer and he’ll leave no stone unturned ahead of his first run.

Champ is a big, physical horse so you’d like to think he has a massive future over fences. He’s exactly what you look for in a chaser.

As for the dangers, obviously Beakstown has been over fences once and he’ll benefit from the experience, while Dashel Drasher is ahead on ratings, but Champ should take all the beating if he puts his best foot forward.

I also ride Carys' Commodity in the bumper (4:15pm) for Jonjo O’Neill, as younger Jonjo [O’Neill Jr] is serving a ban.

He finished second at Newton Abbot which looked a nice run but then unseated last time out at Worcester.

One thing for sure is that Newbury bumpers tend to take plenty of winning, but Jonjo wouldn’t be running him in this if he didn’t think he had a chance.

I had a nice winner at Exeter on Tuesday on a horse called Sporting John from the Philip Hobbs yard.

He’d only won a point-to-point and came into the race with limited experience so it wasn’t a surprise to see him get going late in the day.

About 50 yards from the last I could feel he was finding plenty and knew there was a good chance we’d nab it. 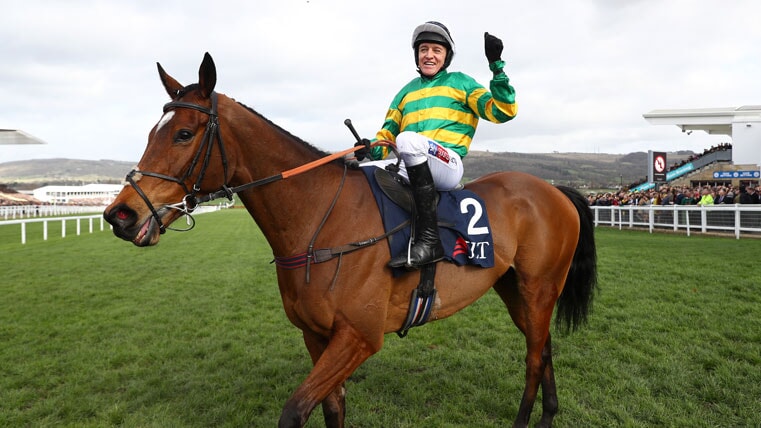 It was a good strong gallop and though they weren’t treading water up front, the leaders certainly tired late on.

I’d like to think he’ll build on that and it will be interesting to see how he gets on when stepped up in company.

He won a point-to-point over three miles so will definitely get further, but he’s clearly capable of competing over two miles as well so he has a few options going forward.

For Good Measure ran well for a long way in the 3m handicap chase but he hit the fifth last and that seemed to knock the stuffing out of him a little.

The handicapper has probably got a good grip on him at the moment while this was also a bit of a step up in class from his last run.

She was disappointing on the day but I still think she’s a nice filly. I’d like to think that was just an off day for her and hopefully she’ll bounce right back.

Front View put in a good run to finish second behind Champion Bumper winner Envoi Allen at Down Royal on Saturday.

He lacked the pace of the winner but Envoi Allen looks a very good horse and we’ve lost nothing in defeat by finishing second to a horse like him.

Ex Patriot was also second in what looked a strong novice chase at Cork on Sunday.

It was his first run back since early March and he should come on for it too.

I think he’s got an exciting winter ahead of him as he jumps well, has pace and handles soft ground too.