I was very happy with Champ's performance at Newbury on Thursday.

He gave a bit of a blow coming into the home straight but filled up on the run to three out and was then back on the bridle going into the last.

He jumped well with the exception of getting in a little close to the cross fence, which will be a good learning curve for him as it's a tricky one.

He was then very good over the last three and was picking up all the time.

He won over 2m4f and 3m over hurdles and has now won over 2m6f on his chase debut, so he's showed he has both speed and stamina and has plenty of options open to him.

There's some very good novice chasers this season, with Battleoverdoyen and Samcro the two that I'm particularly excited about.

Battleoverdoyen is a gorgeous horse who jumped really well on his first time over fences, while Samcro is high class and looks like bouncing back from last season when he had a few health issues.

He started nicely over fences this season and has to be a massive player wherever he goes. 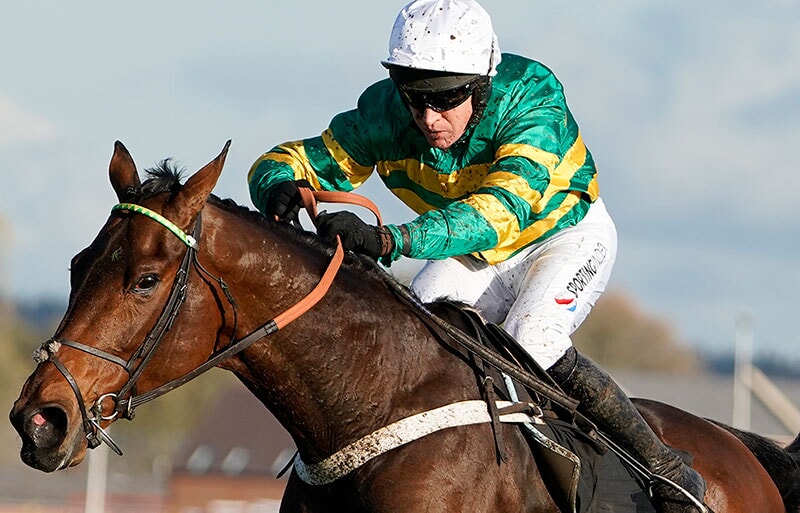 Naas is a big circuit and I'm expecting it to be very soft, particularly on the far side and the better ground will come in the last mile.

It's a pretty stiff track with an uphill climb all the way from the second last and is known to many as the `favourite's graveyard'!

A few of the yards' big guns are coming out and this looks a strong race, with Blackbow the obvious danger from Willie's [Mullins] stable.

I rode You Can Call Me Al on his first start at this track when he was fourth.

That was a nice starting point and he then went on to finish third in a bumper at Navan.

He's a lovely big horse with a nice future ahead of him, but will have to improve a little on his two previous efforts as there looks to be a couple of good horses in here.

Willie is beginning to rally his troops and they're worth keeping an eye on.

Gardens Of Babylon for Joseph O'Brien looks like my best chance of a winner this weekend in the Fishery Lane Hurdle (12.30pm).

He was third in the Triumph Hurdle, which is a good run, second at Fairyhouse in Easter and he was a winner at Punchestown.

That's a strong level of form, so if he puts his best foot forward he'll have a big chance, but he obviously finished out the places in his two most recent starts over the summer.

Tiger Tap Tap was a horse with a big reputation. He chased home the ill-fated Sir Erec at Leopardstown first time out and then disappointed a little in his subsequent two starts.

It's a tricky enough race, with Surin of Gordon's [Elliott] in there too, but I think Gardens Of Babylon has definitely got a big shout if he can reproduce his Cheltenham form.

On a side note, it could be a big season for Joseph [O'Brien] who is a brilliant young trainer. He's got more than 10 years on me but seems to know just as much if not more!

It's unbelievable the depth of knowledge that he has at his age and is now seriously challenging the likes of Gordon and Willie at the top table.

Willie's horse, Cilaos Emery, won well at Gowran Park back in January with Duc Des Genievres back in third and could take all the beating.

Ornua is rock solid and will be there or thereabouts and Winter Escape could be in the mix too, but Cilaos Emery has to be the one to beat.

He's got course form, winning a chase at this track in February, and looks to handle soft ground, but would need to improve on his most recent efforts.

My first ride on Sunday is Impatient Partner in the 2m4f maiden hurdle (1:35pm) for Noel Meade.

We were well-beaten back in fifth at Cork two starts ago and would need to improve to take this.

He does seem to be going in the right direction, but the one to look at here is probably Andy Dufresne.

Gordon holds him in high regard, while Willie has one lining up on his debut for the yard since coming over from France in the shape of Eden Flight.

These races are really hotting up now and they'll take plenty of winning.

My other ride on the day is Fightfortheroses in the 2m handicap hurdle (2:45pm) and he should have a squeak.

He's been knocking on the door in comptitive maidens, though this is a good race and he'll need to keep improving.

Hopefully he keeps on that upward curve and we'll go close.