Barry Geraghty’s Sporting Index blog: Hopefully nothing to worry about with Epatante

I was down at Kempton during the week to work a few of Nicky Henderson’s Cheltenham contenders. Birchdale, Countister and Dame De Compagnie all felt well and we were happy with all three. I’m not sure where they’ll run at this stage, but all should head there with decent chances in whichever races they end up in.

It’s very exciting to have rides like those as well as the likes of Epatante and Defi Du Seuil. Although there is pressure that comes with being on them, it’s not something to shy away from.

We’re in this game to ride the best horses at the big festivals and it’s a challenge you relish. You’d much rather be riding the favourite than an 100/1 shot, so it’s something you’ve got to look forward to and embrace.

The news Nicky reported on Thursday about Epatante is obviously not ideal this close to Cheltenham. I spoke to him yesterday and he isn’t overly concerned at this stage, so fingers crossed she comes through it fine.

The coughing hasn’t affected her work and in any case, she isn’t a filly that needs an awful lot of work. As things stand, it’s not anything to be too concerned about and with any luck she’ll be able to put the little issue behind her.

She was very impressive at Kempton and she’s a ride I’m really looking forward to, so let’s hope she’s fit and firing in a couple of weeks’ time.

Just the one ride for me at Doncaster on Saturday in the shape of Dalila Du Seuil in the handicap chase (2.25pm) for Harry Fry.

I rode her when she won well at Exeter on her UK debut, but fell on her next start at Warwick and has been a bit disappointing since, although her run at Huntingdon last time was a bit better.

She wears a hood as she tends to do a little bit too much in her races, but she does have form on soft ground. Based on that, you’d be hopeful she can run well back down in trip.

It was a tough decision between her and Jerrysback and I just sided with the mare as I thought she had a touch more speed.

I kick my Sunday off with Charlie Parcs in the Racing Hall Hurdle (3.05pm).

He was pretty highly-regarded in his juvenile days and was well-fancied for the Triumph Hurdle in 2017. However, things haven’t gone to plan since and he’s now running for Aidan Anthony Howard in Ireland.

You’d be hoping for a good show, though given he’s been off the track for over a year it’s hard to know exactly where we stand with him. 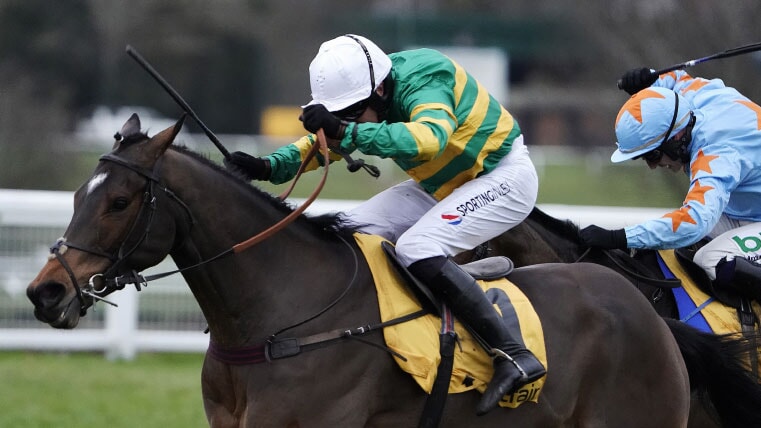 My other ride is Anibale Fly in the Grade B handicap chase (4.40pm).

He isn’t entered in the Gold Cup this year and we’re hoping his run on Sunday will put him spot on for another tilt at the Grand National.

Although it’s obviously a very competitive handicap chase, he’s down a bit in the weights and fingers crossed he can run a solid race, with the slower conditions hopefully more to his liking.

He’s run well in the National for the past two years and I do think experience and age are important factors in the race. I won’t know for a while if he’ll be my ride in the race, but if he can show a bit more spark on Sunday, he’ll be high on the list.

Everything you need to know ahead of the EFL Cup Final as Aston Villa face Man City at Wembley stadium.
Read more