SNP On The March Again

The SNP are on the march again

The latest round of Ashcroft polling was released over night and delivered a further blow to Labour’s aspirations north of the border. The Scottish National Party continues to surprise in individual constituency polls and now once considered rock solid seats for Labour are very much in the balance. Even Gordon Brown’s 23,000 vote majority in Kirkaldy looks to have evaporated since the independence referendum thrust the SNP into the spotlight.

Accordingly, the political spread betting markets have reacted as punters weighed in during the past 24 hours. Starting with a price of 36 on our General Election Seats Market on Wednesday morning, the SNP moved swiftly to 40 by Thursday morning, and as high as 42 just hours later. 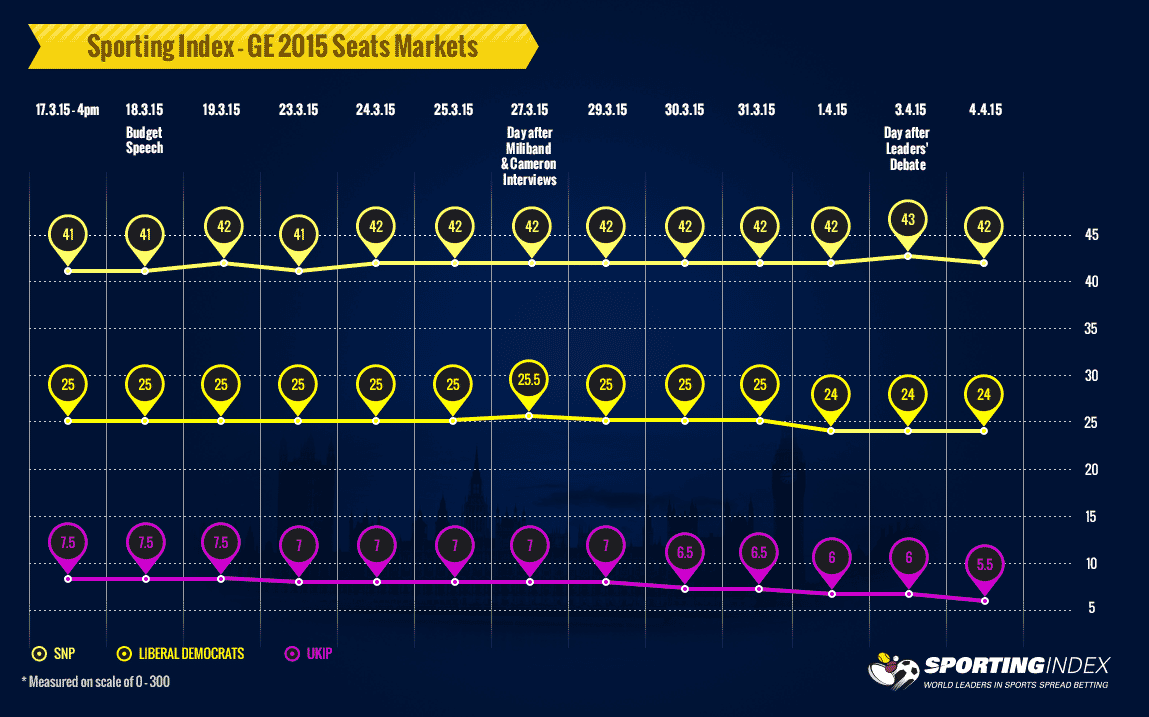 A sizeable block of SNP MPs in Westminster would truly change the British political landscape. It’s well worth remembering that there are currently just six SNP MPs, and Ed Miliband’s Labour would have been counting on Scottish seats to get him over the line and into Number 10. If the SNP do deliver 35-40 seats it will be nearly impossible for Labour to win a majority. Thus, all eyes are on potential coalition partners, or groups that could strike a confidence and supply agreement. It is said that politics makes strange bedfellows, which may never be truer than after the election in just over 60 days’ time.

David Cameron’s options are limited and he is loath to get into bed with Nigel Farage’s UKIP, but his hand may be forced as his current coalition partners – The Liberal Democrats – are shedding seats all over the country. Likewise, Miliband will struggle to bring the SNP into government after they announced their red line negotiation position over removing Trident. What forming part of a government that their party wishes to gain independence from will do to the SNP’s credibility remains to be seen.

The myriad of potential combinations that could form a government post-election is precisely why we’ve launched our ‘Name the Government’ market. Currently, a coalition of Labour + Lib Dems + SNP look like marginal favourites over a Tory + Lib Dem government, but it’s very close. With the Labour + Lib Dem + SNP ‘Name the Government’ choice trading at 27, but the market making up at 100 if it’s how it all ends up on 8 May, it’s well worth investigating.

Sporting Index is the world leader in politics spread betting, offering exciting markets on everything from total seats won in an election, to the vote share of the leading parties, the official turnout percentage and other unique indices. These are updated regularly by traders in response to events and all positions can be closed before the market has been settled to secure a profit, or restrict a loss, with Sporting Index’s pioneering Cash Out option. See our current list of politics spread betting markets.

Sporting Index is the world leader in sports spread betting, offering 100+ markets on the world’s most popular sports. Whether it is buying the margin of victory in an election or selling the number of seats each party will win, bettors have never had such a wide and immersive political betting experience. Sign up for a Sporting Index account today and enjoy the most exhilarating betting experience there is.

Spread Bet On Other Sports And Betting Markets