While most of the other parties have been shouting about TV debates, or being caught out by journalists posing as potential donors, the Conservatives have been quietly putting some distance between themselves and the chasing pack.

The political spread betting markets have been very active over the past couple of days, and it’s the Tories who are the beneficiaries. Starting with a price of 276 on our General Election Seats Market when the markets opened in November, the party led by David Cameron sits currently on 285 seats, having added three seats this week alone. 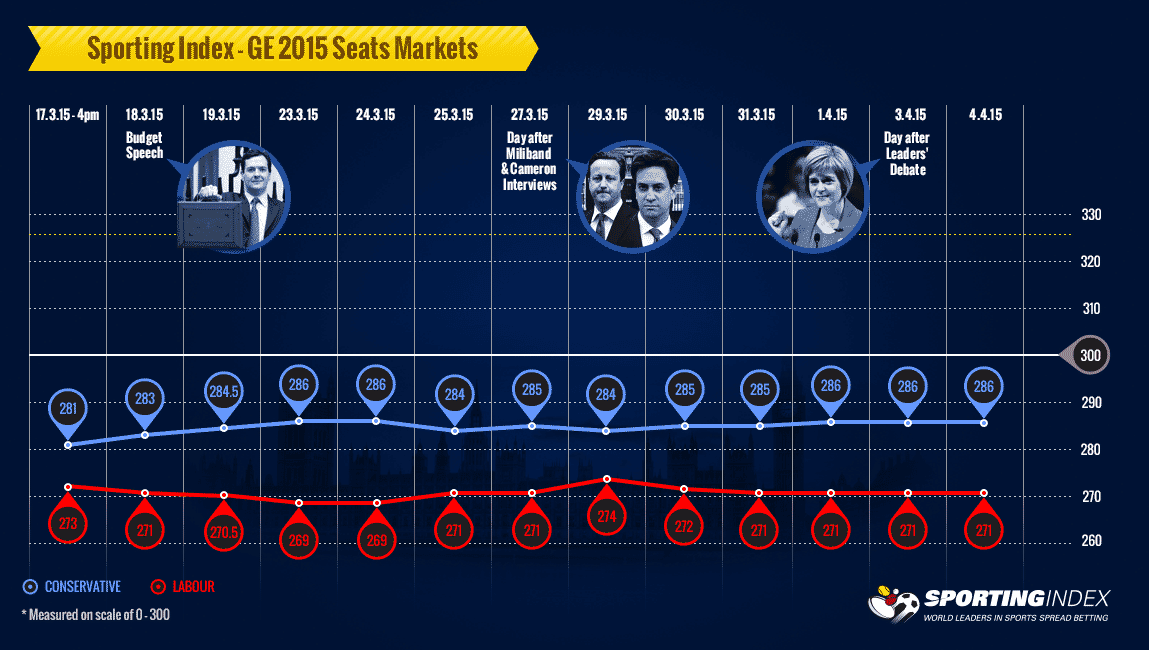 Many subscribe to the theory that the incumbent government receives additional support from undecided voters in the weeks leading up to the election, but with 50 days to go until the polls open, this move could be more than just a natural uplift. Labour’s fortunes have gone the other way of late as it looks increasingly likely that Ed Miliband will struggle to cut through the noise and grab the public’s attention without TV debates.

Cameron and his team know this of course, and are doing everything in their power to avoid debates full stop, let alone a head to head with Miliband. Labour’s seats have sunk to 270, which is quite the come down from a high of 294 in November. The worry for Labour is that the last Budget speech of this parliament is on Wednesday the 18th and George Osborne will certainly use it to try and woo the electorate further. Already word from journalists in the know is that they will cut alcohol duties again, which is always a popular move. Once again Sporting Index will be running Budget 2015 markets including length of time the speech takes to deliver, how many sips of water Osborne will take, how many times ‘order’ is called by speaker John Bercow and more. It’s an incredibly exciting time for political spread bettors as we go under 50 days until the election with the Budget on the horizon and TV debates looming – it’s still all to play for.

Sporting Index is the world leader in politics spread betting, offering exciting markets on everything from total seats won in an election, to the vote share of the leading parties, the official turnout percentage and other unique indices. These are updated regularly by traders in response to events and all positions can be closed before the market has been settled to secure a profit, or restrict a loss, with Sporting Index’s pioneering Cash Out option. See our current list of politics spread betting markets.

Learn About Spread Betting On Other Sports