Mondday 4th May 2020 –Neymar and Ronaldo are amongst the players to have attracted world record transfer fees, but the latest study from Sporting Index shows both of those fall short of Harry Kane’s current achievements.
It has been suggested that the Spurs frontman could be set for a summer transfer move for a fee of £200m, and in a comparison with the last 10 attacking players to have broken the transfer record that figure looks justified.
Kane is ahead on goals scored, assists and goals-per-game when compared to the average taken from the previous 10 world record transfer signings at the time they were sold. 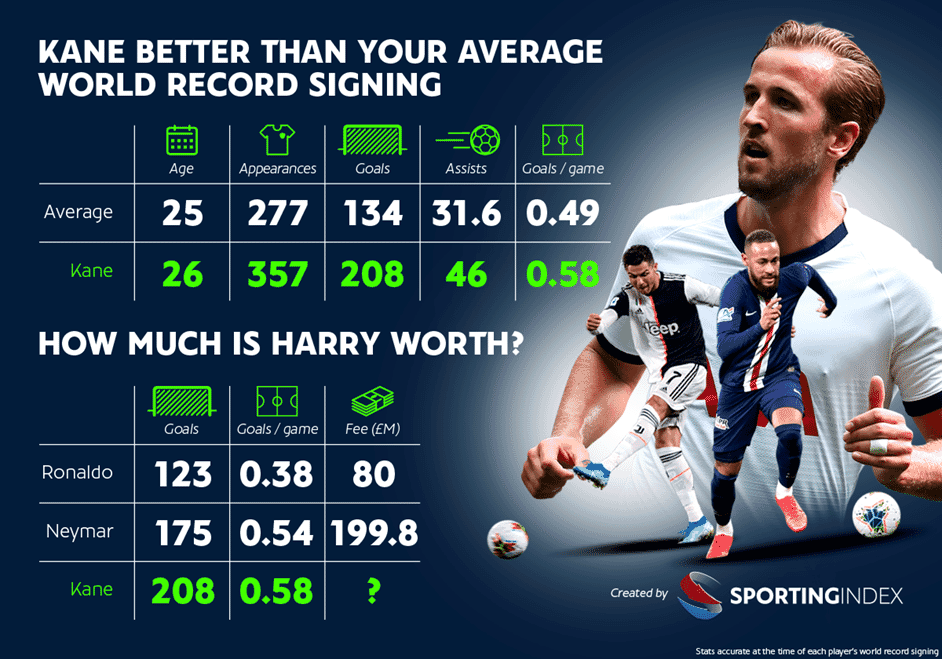 The England skipper’s goal tally currently sits at 208, so a rumoured record-breaking transfer would mean only Jean Pierre-Papin would have scored more goals (232) at the time of his respective record move in 1992.
The likes of Neymar and Shearer had only scored 175 and 173 goals at the time of their record transfers to PSG for £199.8 million and Newcastle for £15 million respectively, with Kane holding a superior goals-per-game ratio over both players.
The Three Lions captain is more lethal than most strikers on the world record-breaking fee list with a ratio of 0.58 goals-per-game, compared to the average rate of 0.49, but Brazil’s Ronaldo reigns supreme at 0.94.”
Neville Burdock, Head of Trading at Sporting Index, said: “It’s getting harder to ignore swirling rumours of a Harry Kane move away from Tottenham which would likely come with a giant price tag, so we’ve compared his stats to the strikers who have previously broken the world record for transfer fees.
“At 26-years-old, Kane already boasts the second-highest goals and appearance figures of the list of strikers, as well as the third-best goals per game ratio, so it’s not hard to imagine that he could be the next record-breaking transfer.” 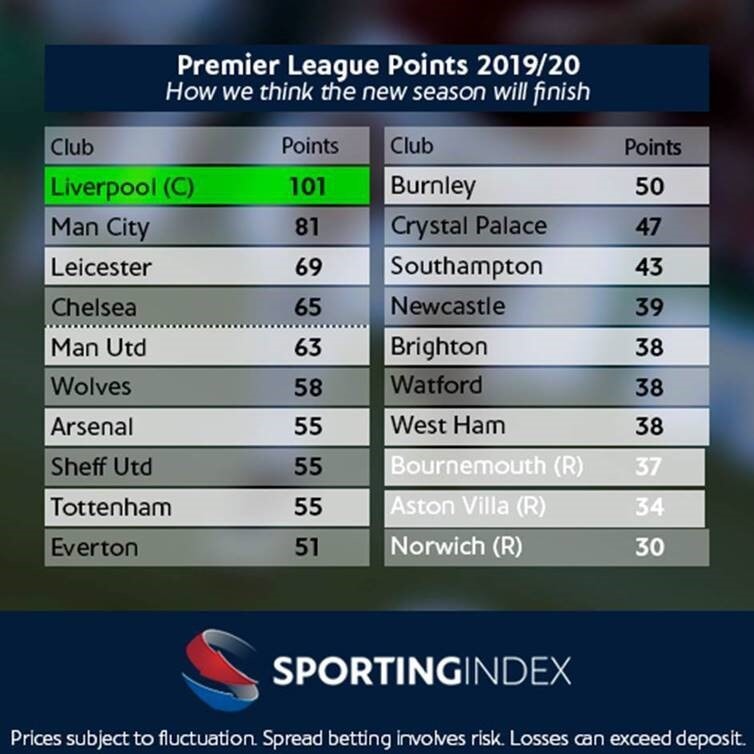 Wednesday 13th May 2020 –Liverpool will break the Premier League points record if top-flight football makes a return this season, according to betting firm Sporting Index.
The Reds currently hold a 25-point lead at the top of the league and would require 19 points from their final nine matches to break Manchester City’s record total of 100 points, meaning six wins and one draw would be enough to write themselves into the history books.
The rest of the top four will consist of Man City, Leicester and Chelsea with Manchester United missing out on a Champions League spot by an agonising two points, should the traders at Sporting Index get things right. The betting firm also predicts there will be no European place for Tottenham with Jose Mourinho’s side tipped to finish ninth.
At the wrong end of the table, Norwich will be joined in relegation by fellow promotion strugglers Aston Villa as well as Eddie Howe’s Bournemouth. West Ham, Brighton and Watford will perform the great escape by finishing on 38 points – one more than the Cherries.
Neville Burdock, Head of Trading at Sporting Index, said: “We’re hoping an announcement on a Premier League return could happen sooner rather than later, and as a result we’ve prepared our predictions for the rest of the season and expect Liverpool to secure a record 101 points on the way to securing their first ever Premier League trophy.
“It’s not good news for Manchester United fans as we predict Ole Gunnar Solskjaer’s side will miss out on Champions League football by two points. At the bottom of the table, we think Norwich and Aston Villa’s fate is already sealed and they will be joined by Bournemouth who will drop into the Championship for the first time in five years.”

Friday 15th May, 2020 – Football fans will be treated to 27 goals in the Bundesliga as Germany’s top-flight division returns to action, according to betting firm  Sporting Index.
The spread betting experts have totted up the numbers and also expect goal minutes – a prediction of the total minutes of each strike – to come in at 1,370, as nine matches are set to get the go ahead from Saturday to Monday.
The Bundesliga is the first of Europe’s top leagues to return to action, and one of the biggest matches will see Borussia Dortmund face city rivals Schalke in the Revierderby battle. Sporting Index have priced total bookings for the encounter at 52, with 10 points per booking and 25 points for a red card.
The Revierderby is one of the first fixtures to take place tomorrow, alongside four others at 2.30pm, and Sporting Index have priced the earliest goal of tomorrow’s Bundesliga action to come in this fixture in the 33rd minute.
Neville Burdock, Head of Trading at Sporting Index, said: “It’s incredibly exciting to have live football back on our screens and the Bundesliga return will be eagerly anticipated by many football fans across the world, not just in Germany.
“We predict a weekend filled with goals – 27 to be precise – while we’re backing the first goal of the weekend in Germany to come in the Revierderby between Borussia Dortmund and Schalke.” 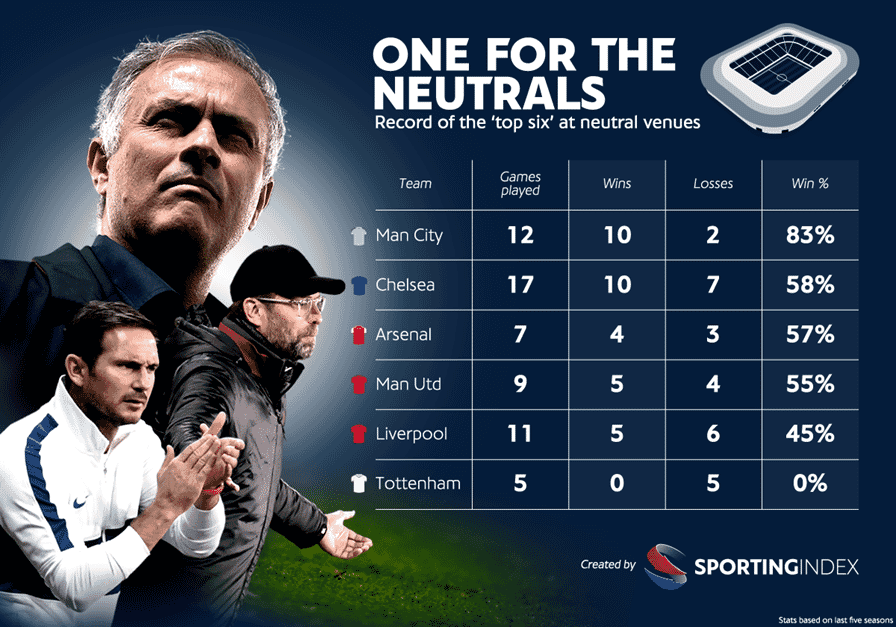 *Stats based on last five seasons
Wednesday 20th May, 2020 – As the Premier League’s proposal of playing remaining top-flight matches at neutral grounds is mulled over, research from betting firm  Sporting Index reveals Tottenham Hotspur have the worst record at neutral venues in recent times.
The statistics are taken from matches over the last five seasons, with Spurs struggling most of the traditional top six – losing all five of their matches – and Liverpool only winning 45% of theirs (five out of 11).”.
It comes as no surprise that Manchester City have the best record of top six sides at neutral venues, with the Citizens winning 10 out of the 12 matches they have played – an 83% win rate, including four of the last five EFL Cup finals.
Chelsea, Arsenal and Manchester United finish second, third and fourth of the top six respectively. The Blues have won 10 of their 17 matches at neutral venues (58%), with Arsenal winning 57% of their seven neutral ground games and Manchester United five out of nine (55%).”.
As the proposal continues to be discussed by Premier League bosses and top-flight clubs with the aim of concluding the current season, Aston Villa, Brighton, and Watford have been the biggest opponents of clubs playing remaining fixtures at neutral grounds.”.
And the data shows why as the Seagulls have won 50% of their matches at the Amex Stadium over the last five seasons, while Villa have a 45%-win rate and Watford 37% at their own grounds.”.
Neville Burdock, Head of Trading at Sporting Index, said: “The Premier League’s proposal to play the remaining 2019/2020 fixtures at neutral grounds was never going to be welcomed by all top-flight clubs, and it’s clear to see why some might be against the idea.
“Of the top six clubs, Tottenham and Liverpool have the worst record at neutral venues over the past five seasons. Spurs have lost all five of their matches, while Liverpool have won less than half (45%) of theirs. Manchester City lead the way with an 83%-win rate, followed by Chelsea on 58%, Arsenal on 57% and Manchester United on 55%.”“


Thursday 21st May 2020 – Tyson Fury will be the next undisputed heavyweight champion, according to a poll from betting firm  Sporting Index, which surveyed over 4,000 boxing fans.
The poll asked 4,400 diehard boxing fans on Twitter and Facebook to pick who would be the most likely undisputed heavyweight champion – holder of all four major belts (WBC, WBA (Super), WBO and IBF titles) – out of Fury, Anthony Joshua and Deontay Wilder, with 72% selecting the Gypsy King.
Fury is due to fight Wilder for the third time in as many years after his defeat triggered a contract clause for a trilogy fight. The Bronze Bomber’s team threw in the towel in the seventh round of their rematch in February. It’s likely that AJ would fight the winner of that trilogy, should he get past Bulgarian Kubrat Pulev.
I’ve had my fair share of success on the big days, particularly with five wins at the Cheltenham Festival, and given that the surgeon said my leg wouldn’t be at full strength until after Christmas, everything has worked out pretty well.

Wednesday 27th May, 2020 Under fire Chief Adviser Dominic Cummings will resign in three weeks, according to betting firm  Sporting Index.
The political strategist continues to face calls from MPs and the British public to step down from his role after reportedly breaking lockdown rules, and the political experts at Sporting Index predict he will be gone in 21 days.
Senior cabinet ministers and Prime Minister Boris Johnson have defended his actions in a bid to keep him in his position, but the political experts think Cummings will be gone in the middle of June.
The traders at Sporting Index have also analysed the situation and expect four ministers to resign as part of the ongoing Cummings saga.
Phill Fairclough, trading spokesperson at Sporting Index, said: “It’s not been a good week for Dominic Cummings and Boris Johnson, and it doesn’t look like it’ll get any easier for the Chief Adviser as calls for his resignation continue to mount.
“There’s only so much defending that can be done, and we think that things will eventually come to an end with Cummings stepping down from his post in the next three weeks, but not before four ministerial resignations come first.”


FRANKIE'S ON BOARD AT SPORTING INDEX 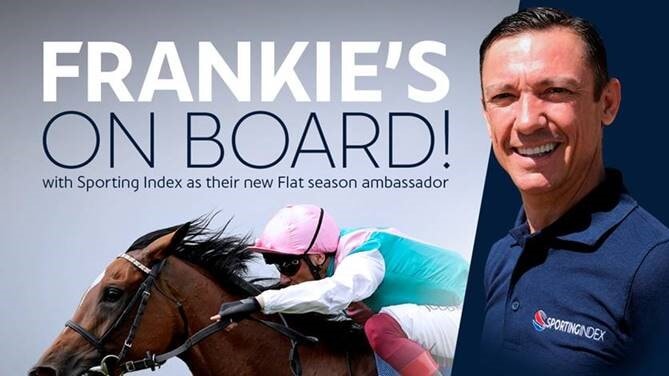 Friday 29th May, 2020 Sporting Index has made the landmark signing of world-class jockey Frankie Dettori, widely regarded as one of the greatest riders of all time, as a brand ambassador.
The deal will see Dettori carry the Sporting Index logo on his breeches and collar, offer exclusive thoughts on his rides at  Sporting Index and support with social media posts and daily previews during the season’s major meetings, such as Royal Ascot.
The Italian’s unrivalled achievements in the Flat racing sphere consist of 19 British Classics, including two Derby wins at Epsom, and an astonishing 251 Group 1 victories worldwide. He currently holds the LONGINES World’s Best Jockey Award and has done so for three of the last five years.
Sporting Index, who launched a fixed odds offering in 2019 to run alongside its well-established spread betting service, also currently sponsor leading National Hunt jockey Barry Geraghty, who celebrated a vintage Cheltenham Festival with five wins in March.
Simon Trim, CEO at Sporting Index, said: “Frankie is the face of Flat racing, if not horse racing as a whole, so it’s hugely exciting to have him as a Sporting Index brand ambassador.
“He is often riding the most talked about horses of the season, like Enable and Stradivarius, and we’re delighted to be able to bring racing fans closer to that with his regular blog.
“Even though he has cost us plenty of money over the years, no-one has done more to promote the sport of horse racing and we couldn’t be happier to have him on board.”


Frankie Dettori, said: “I’m over the moon to be joining Sporting Index ahead of the new Flat season. There are some top-quality horses that I can’t wait to get on this year, and I look forward to telling readers all about them.
“I saw over the winter that Barry Geraghty had plenty of success with Sporting Index on his breeches, so hopefully it’s the same for me too!”