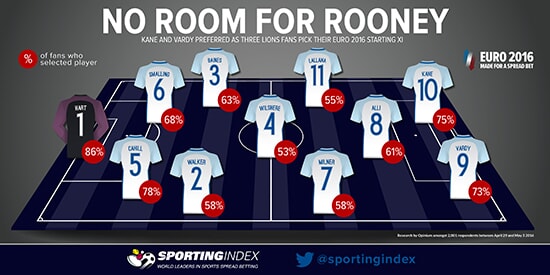 Chelsea's Gary Cahill (78%) and Manchester United's Chris Smalling (68%) are the fans' starting central defenders, with Tottenham's Kyle Walker (58%) getting the nod at right-back. Everton's Leighton Baines was selected by 63 per cent of fans to start at left-back, just beating out Danny Rose (61%).

The most disagreement between Three Lions supporters was in midfield. Starlet Dele Alli (61%) was preferred to Ross Barkley (59%) to top a diamond formation. The Spurs man would be flanked by Liverpool duo James Milner (58%) and Adam Lallana (55%), with Arsenal's Jack Wilshere (53%) sat in front of the back four.

Domestic goal machines Harry Kane (75%) and Jamie Vardy (73%) are the strike force fans want to see manager Roy Hodgson call upon, with Wayne Rooney (68%) just missing out alongside Daniel Sturridge (64%). Less than half of England fans would start Theo Walcott (49%).

Wayne Lincoln, trading spokesperson for Sporting Index, said: “With Roy Hodgson’s 23-man squad to be announced imminently, all eyes will turn to who starts against Russia in the opening Euro 2016 group game next month.

“Three Lions supporters from around the country have given us their view, and there is no room in their starting XI for perennial Hodgson picks Wayne Rooney, Daniel Sturridge, Ross Barkley, Raheem Sterling.

“The fans are hoping that their chosen prolific strike force, Harry Kane and Jamie Vardy, can carry their scintillating domestic form at Euro 2016 – or that Rooney can make an impact off the bench.”