The eagerly anticipated new season pits Manchester City against Manchester United once again. City edged it by the narrowest of margins last year, but what will the League table look like on on the last day this time round?

The Noisy Neighbours Are About To Get Louder

The 2011/12 football season was a good one for the blue half of Manchester. 89 points, a superior goal difference, and a frantic spell of injury time on the final day gave City fans a rare opportunity to laud it over their United rivals. And Sporting Index are predicting a repeat of that championship-winning season for Man City, albeit with a winning total of 83 puts and the relative comfort of a 3pts cushion.

As for the rest, Sporting Index think they’ll finish the 2012/13 Premier League season a bit like this...

It was a good time to be a Man City supporter last season. Apart from the obvious, the Citizens were in the top for all 38 weeks.

The Carling Cup was a rare bright spot for Liverpool fans. In the league, they witnessed their lowest number of victories - just 14.

Life was never dull for a Norwich supporter last term. They kept only 3 clean sheets all season.

Forget ‘Fergie Time’. City’s prayers were answered on no fewer than 10 occasions in stoppage time. 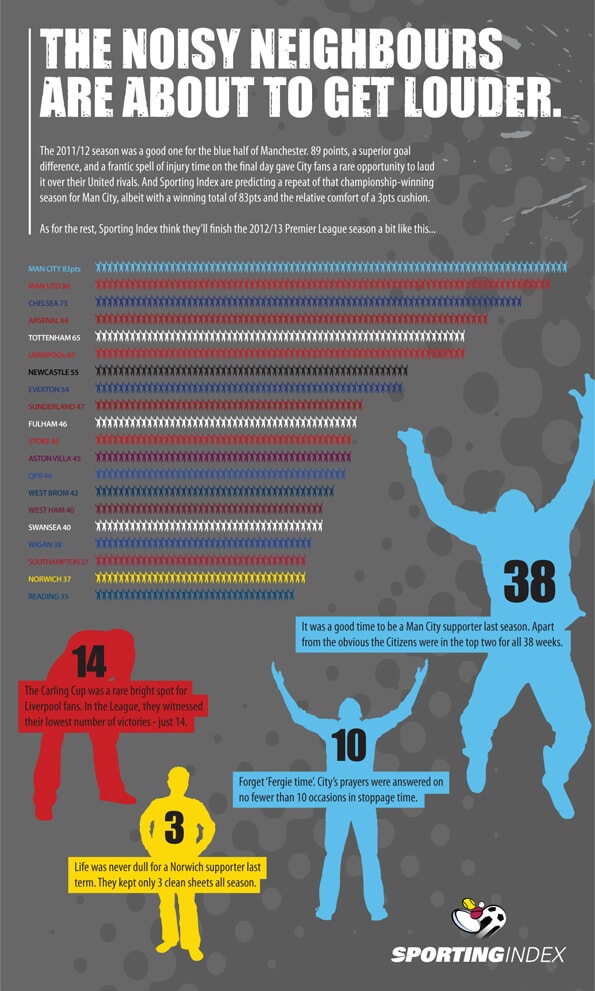 Leading the way in football and sports betting

Sporting Index is the sports spread betting leader, offering 100+ markets on the most popular sports (including football matches and premier league betting). Whether it is premier league football and betting on one team’s supremacy over another or betting on other sports matches, bettors have never had such a wide and immersive betting experience. Sign up for a Sporting Index account today and enjoy the most exhilarating betting experience.