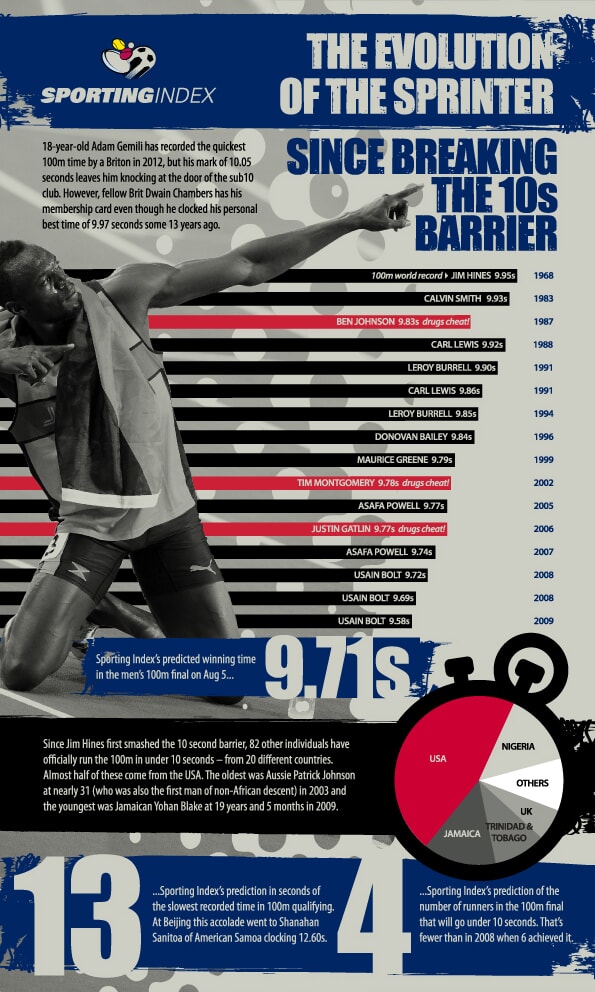 The Evolution Of The Sprinter Since Breaking The 10s Barrier

18 year old Adam Gemili has recorded the quickest 100m time by a Briton in 2012, but his mark of 10.05 seconds leaves him knocking at the door of the sub 10 club.  However, fellow Brit Dwain Chambers has his membership card even though he clocked his personal best time of 9.97 seconds some 13 years ago.

Here are some of the stats:

Since Jim Hines first smashed the 10 second barrier, 82 other individuals have officially run the 100m in under 10 seconds - from 20 different countries.  Almost half of these come from the USA.  The oldest was Aussie Patrick Johnson at nearly 31 (who was also the first man of non-African descent) in 2003 and the youngest was Jamaican Yohan Blake at 19 years and 5 months in 2009.

Sporting Index’s prediction in seconds of the slowest recorded time in 100m qualifying is 13.  At Beijing this accolade went to Shanahan Sanitoa of American Samoa clocking 12.60s.

Sporting Index’s prediction of the number of runners in the 100m final that will go under 10 seconds is 4.  That’s fewer than in 2008 when 6 achieved it.