I’ve got Hypothetical in the Golden Gates Handicap (1:15pm) to kick things off on Thursday.

Things didn’t quite pan out for us at Kempton on his reappearance and he deserves another chance.

That experience will stand him in good stead and I’m looking forward to having another go on him.

We’re unsure in terms of ground as he’s only ever run on an artificial surface, while it’s hard to know what we’re going to end up racing on with such an unsettled forecast.

Crossed Baton then has a chance in the Wolferton Stakes (1:50pm).

I had the choice between him and Dubai Warrior, both trained by John [Gosden], so hopefully I’m on the right one.

Dubai Warrior is going for four wins on the bounce so is clearly a progressive horse, but he’s got to carry a couple more pounds too. 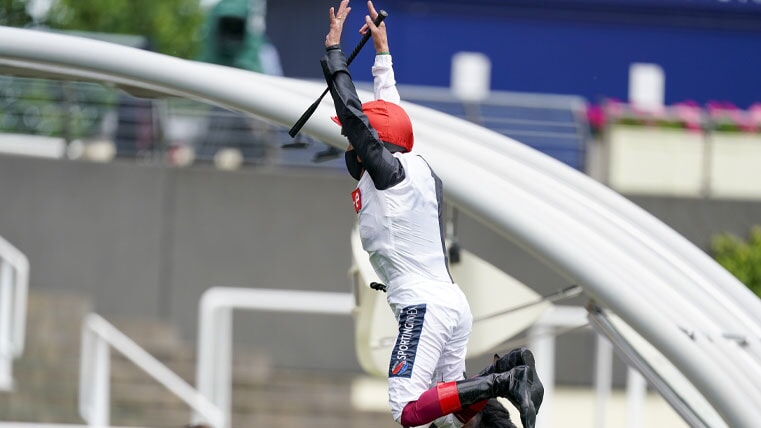 It’s then onto the Jersey Stakes (2:25pm) where I ride King Leonidas for John.

It looks a very open contest and we can’t be too sure about the form of the other horses but I like mine a lot.

He’s a nice, improving son of Kingman, whose progeny have started the season very well, and I think he’s a pretty smart horse.

We are stepping back to 7f but he’s won over the trip so that shouldn’t be an issue.

Golden Flame in the Chesham Stakes (3:00pm) is my final ride before the big one on Strad.

He was second at Haydock which looked a decent run, though all of the two-year-olds in here have only had one run so it’s very hard to know what’s what.

He’s by Golden Horn, who I won the Derby on, and I think he should run a good race.

Gold Cup day is always hugely important but maybe even more so this year as we’re going for the hat-trick with Stradivarius.

I just hope that the heavy rain stays away as I’m not sure he’ll like it if the going turns heavy.

Aside from that, there’s no reason he can’t win it again.

He stays the trip well, has a good turn of foot and has been there and done it, so I don’t see why not.

He ran well in the Coronation Cup on his return and this has always been the number one target.

He may have only been third at Newmarket behind Ghaiyyath and Anthony Van Dyck, but that was like running Usain Bolt against Mo Farah!

The whole point of that run was to give him a day at the races and get him 100% ready for today.

He wears his heart on his sleeve, gives his all and I hope we can do it.

John’s picked out the Britannia for Verboten so I’m ready to get on him for the first time.

The big concern would be how high in the handicap he is, giving weight to all bar one of the 24-runner field, but he obviously has some fairly strong form.

Dubai Love in the Sandringham will be my first ride for Saeed [bin Suroor] in eight years so I’m looking forward to that!

He told me he had chosen one for me and asked if I would be free to ride so I hope he’s got a good chance.

I’ve won the Sandringham a few times and it would be nice to add another one to the tally.