I’m living a dream at the moment! From a record three King Georges on a superstar mare like Enable, to making another piece of history with a fourth Goodwood Cup on an absolute champion with Stradivarius in the space of three days, it’s brilliant. 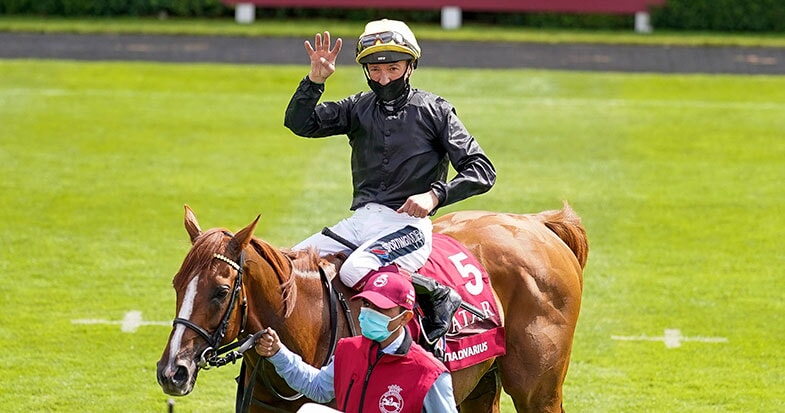 Everyone one was out to beat us, we were giving 15lbs away, we had to wait for the gap to open, but I knew I had a good partner.

I spoke to Aidan [O’Brien] earlier in the week and I was keeping my fingers crossed that I’d get the ride.

Ryan Moore gets first pick and he’s stuck with Circus Maximus having won the Queen Anne together at Royal Ascot last month, and that’s fine with me as I really like Wichita.

He’s a proper horse who gave me a great feel in the 2000 Guineas earlier in the season, and then he ran well in the St James’s Palace Stakes at Royal Ascot.

Between us, the other two O’Brien runners, Siskin, Mohaathem and Kameko, it is without doubt the race of the week.

All the best milers are there, maybe apart from Palace Pier, and it should be a cracker.

It doesn’t matter whether you’re on the first, second or third string with Aidan, he’s got a yard full of high-class horses and you just don’t know which is the best one.

As we know, the handicaps at Goodwood this week are ultra-competitive, but all three are for John [Gosden] and the yard is in good form.

I haven’t ridden Lake Lucerne before but she looks fairly unexposed and won a maiden last season.

She’s hopefully one that’s got some ability and is progressive, while Ecipher has been tried at a higher level already and is nearer the top of the weights in this race as a result.

This represents a big step down in class from the Dante Stakes where he ran last time, so hopefully he can get competitive again.

Verboten is a decent three-year-old getting weight against older horses, but he’ll need to return to form having finished down the field at Ascot last time out.

Thursday looks set to be a cracker too, where I’m delighted to be riding another one for Aidan with Magic Wand in the Nassau Stakes, but more on that tomorrow.