5 Managers to Win a League as both a Player & Coach

The Unlikely Lads: 5 Managers to Win a Top-Flight League as Both Player and Coach

World-class players are often given plenty of exciting managerial opportunities after hanging up their boots for the final time. It does not always work out, as anyone who has watched teams managed by the likes of Diego Maradona, Gary Neville, Alan Shearer, Tony Adams and Lothar Matthaus can attest. Yet every now and then a phenomenal player goes on to become an extraordinary coach. These are some of the greatest former professionals to make a successful transition into management:

Barcelona were in terminal decline when the board took the bold decision to sack Frank Rijkaard and replace him with club legend Pep Guardiola. The former midfielder won six La Liga titles and the European Cup during his playing days, but he had no managerial experience aside from a year in charge of Barcelona’s B team. Yet Guardiola had a bold vision for the club. He quickly offloaded several key players – Ronaldinho, Deco, Gianluca Zambrotta, Giovani dos Santos and Edmilson – and built a new team around the talents of Xavi, Andres Iniesta and Lionel Messi. It was a roaring success.

Barca became easily the best team in the world, dazzling everyone with their tiki-taka football. In just four seasons, Guardiola won three La Liga titles, two Champions Leagues, two Copa del Rey titles and seven other trophies. He made the shock decision to leave the club in 2012, and he reappeared at Bayern Munich a year later. He won the Bundesliga title in each of his three seasons at the Bavarian club, along with two DFB-Pokal titles, before moving to Man City. During his time in Manchester, he has broken the Premier League points record and won eight trophies in four years. His teams win a great deal of silverware, but they also do so in style, playing some of the most attractive football anyone has ever witnessed.

Zidane was the world’s best player at the height of his career. He led France to glory in the World Cup and the European Championship, won two Serie A titles at Juventus and then became the star Galactico at Real Madrid, where he won La Liga and the Champions League. He can now claim to be the world’s best manager too, after enjoying an outrageously successful tenure at Real Madrid. Once again, he was handed the job despite having no managerial experience, but he has made a tremendous success of it.

Zidane took over from Rafa Benitez in January 2016, with the club in disarray. Yet he steadied the ship with aplomb, and Los Blancos finished just a point behind champions Barcelona after making up a great deal of ground in the second half of the campaign. They then went on to win the Champions League, beating city rivals Atletico Madrid in the final. In Zidane’s first full season in charge of the club, Real Madrid won La Liga and then beat Juventus 4-1 in the Champions League final. They secured an unprecedented third consecutive Champions League title the following year, beating Liverpool 3-1 in the final. Zidane then walked away in protest after the club sold Cristiano Ronaldo. His replacements struggled badly, so the club convinced him to return in March 2019, and he has just won another La Liga title in 2020. 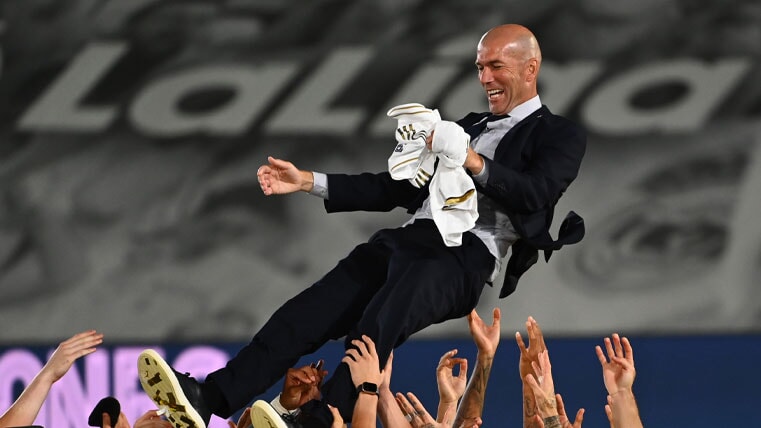 The Scottish forward lit up Anfield after replacing Kevin Keegan in 1977. He went on to win six First Division titles and three European Cups during an extremely successful time in Liverpool’s history. As a player, Keegan won 31 trophies with Liverpool and Celtic. His influence in the Anfield dressing room was so great that Dalglish was installed as player manager in 1985. Liverpool won the double in his first season, and Dalglish banged in the winning goal in a 1-0 victory over Chelsea to hand his team the title on the final day of the campaign.

He juggled both roles in supremely assured fashion, scoring 21 goals and being named Football Writers' Association Footballer of the Year during his second season as manager. Liverpool sold Ian Rush to Juventus in 1987 and Dalglish was no longer a force as a player, so he brought in John Aldridge and Peter Beardsley to form a successful new strike partnership. He ended up winning three First Division titles, two FA Cups and the league cup during his time as manager. He later took over as Blackburn boss and led them to the Premier League title in 1994-95, with Alan Shearer and Chris Sutton leading the charge.

Conte began his career at Lecce and then went on to become one of the most influential and decorated players in Juventus history. He captained the team that won the Champions League, five Serie A titles and many more trophies. He cut his teeth as a manager in Serie B, winning the division with Bari and securing promotion with Siena, while he also spent a year in charge of Atalanta. Juventus came calling in 2011, and he quickly implemented his famous 3-5-2 formation, which heralded a successful new dawn for the club.

Juventus won Serie A during each of Conte’s three seasons in charge. He was praised for his tactical nous, his winning mentality and ability to foster great team spirit among his players. He brought the best out of veteran Andrea Pirlo in midfield, and developed an immense back three of Girgio Chiellini, Leonardo Bonucci, and Andrea Barzagli. Conte left to take charge of Italy, but they were unlucky to lose to Germany in a penalty shootout in the 2016 World Cup quarter-finals. Conte then went on to win the Premier League and the FA Cup during his tenure at Chelsea, before moving to Inter to helm an ambitious project in Milan.

The deep-lying forward won the Scudetto with both Sampdoria and Lazio, while he also won six Coppa Italia titles and two European Cup Winners’ Cups. As a player he would regularly give the team talks at half-time and he became assistant manager to Sven Goran-Eriksson at Lazio towards the end of his playing days. Fiorentina moved quickly to appoint Mancini as manager after he retired, and he won Coppa Italia during his first season in charge, before taking over as Lazio manager. He also won Coppa Italia at Lazio, and then took over as manager of Inter Milan.

That marked the start of Mancini’s most successful period as a manager. Inter won the Serie A title three years in a row between 2006 and 2008, and he also won two Coppa Italia titles. He later moved to England to manage Man City, winning the FA Cup in 2011 and then leading the club to their first Premier League title the following season. He has since won the Turkish Cup as Galatasaray manager, taking his haul to 13 trophies as a player and 13 as a manager.

Will Frank Lampard be the next name to be added to this exclusive list? You can find all your football odds and football spreads at Sporting Index.

Sports fans were treated to a barrage of exciting action as the world returned to a semblance of normality in July...
Read more