March 2020 will go down in history as one of the strangest months the sporting world has ever experienced. Matches were suspended, tournaments were abandoned and superstar athletes were forced into isolation along with the majority of the population. However, the Cheltenham Festival still went ahead, while our traders have been busy pricing up markets on simulated events, political developments and niche sports leagues. These are March’s biggest make-ups.

Underdog Surges to Victory in the Foxhunters Chase

Excited chatter about the chances of a select few in-form runners dominated the build-up to the Foxhunters Chase on the final day of the Cheltenham Festival. Willie Mullins’ Billaway was installed as the 11/4 after storming to victory in the Hunters Chase at Naas earlier in the year. Shantou Flyer (3/1) and Minella Rocco (5/1) were both expected to provide stern competition, as they were both coming off impressive wins. It Came To Pass, a 66/1 outsider from the Eugene O’Sullivan stable, was not given much hope of challenging the main contenders.

O’Sullivan won the race 29 years previously with Lovely Citizen, but he had not come close to repeating the feat ever since. It Came To Pass had finished 24 lengths off the pace in his previous outing, the Bluegrass Hunters Chase at Down Royal, and many felt he was simply making up the numbers. However, the 10-year-old burst onto the scene with a well-timed challenge and then motored away from the chasing pack. He finished 10 lengths clear of second placed Billaway, drawing gasps from the crowd. It was a family affair, as O’Sullivan’s daughter Maxine was the winning jockey.

Sporting Index offers an exciting sports spread betting market called Splengths on big races. To calculate the result, we multiply the horse’s SP by the number of lengths it wins by. In this instance, the SP was 66/1 and the winning margin was 10 lengths, resulting in a make-up of 660. Before the race, the spread was quoted at 28.5-33.5, which is well below the final make up. 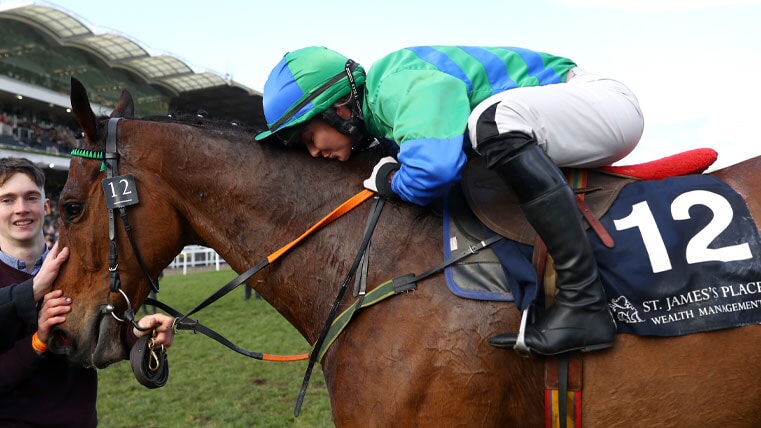 Barry Geraghty Has a Cheltenham to Remember

Cheltenham legend Barry Geraghty is still going strong at the age of 40 and punters are often keen to see how he will fare at the famous meeting. We set a Winners x10 Index of 22-25 on him before the festival began. This is calculated by multiplying the number of winners he managed by 10, so we were expecting him to ride somewhere between two and three winners.

Geraghty, who still finds time in his busy schedule to write an extremely insightful Sporting Index column, made a flying start to proceedings when he rode Champion Hurdle favourite Epatante to victory on the opening day. He was then aboard Champ when the eight-year-old staged a phenomenal comeback to seize the RSA Chase. Champ trailed by nine lengths as they came up the hill, but he somehow made up the deficit and edged victory following a Herculean effort.

Geraghty then steered Dame De Compagnie to glory in a two and a quarter length triumph over Black Tears on the second day. He followed it up with another win when Sire Du Berlais won the Pertemps Network Final Handicap Hurdle for the second year in succession, and then his fifth winner came aboard Saint Roi in the Randox County Hurdle. It left Geraghty level with Paul Townend, with five wins apiece across the Festival. It also resulted in Barry Geraghty’s Winners x10 spread betting market settling 25 points greater than the price that punters could have bought at.

Every year the Prestbury is awarded to the country whose trainers secure the most victories at the Cheltenham Festival. It was a draw in 2019, so punters may have expected a close battle this time around. Great Britain made a strong start when Nicky Henderson’s Shishkin won the Supreme Novices’ Hurdle, but Ireland immediately drew level through Henry de Bromhead’s Put The Kettle On. By the end of Day One, it was 4-3 to Great Britain, with de Bromhead securing a second winner and Gordon Elliott getting off the mark.

Ireland immediately achieved parity when Elliott’s Envoi Allen won the Ballymore Novices’ Hurdle on Day Two. A Henderson double then put Great Britain 6-4 up, and they extended the lead when Paul Nicholls’ Politologue took the Champion Chase. Another win for Elliott towards the end of the day kept Ireland in touching distance, and then Mullins finally secured a long overdue win. However, the situation was looking precarious for the Irish as the action moved into Day Three, and the price on an Ireland victory was just 15-18, with 100 points awarded to the winner.

Yet the Irish then totally took over. By the end of the Cheltenham Festival, Mullins and Elliott each had seven winners. They incidentally both had seven runner-up finishes too, and the top trainer title was only awarded to Mullins as he had more third places. Their head-to-head battle was great news for Ireland’s chances of winning the Prestbury Cup, and they ultimately recorded a 17-11 victory.

Desperate times call for desperate measures. Test cricket fans were left devastated when England’s tour of Sri Lanka was postponed, so Sky Sports statistician Benedict Bermange decided to simulate the matches. Thousands of fans followed the action, while the likes of Stuart Broad got involved in the fun by Tweeting about virtual team meetings during the breaks. England won the first simulated Test, and then a determined batting effort led them to a draw in the second Test, allowing them to close out a 1-0 series victory.

Our traders also joined in the action and began offering sports spread betting markets on it. Before the second Test, they assigned a Total Runs Index of 44-49 to Sri Lanka’s Dinesh Chandimal for his first innings. The former captain ended up hitting a magnificent 111 not out to put his team in a strong position on the second day in the virtual Test. That is 62 above the price you could have bought at before the match began.