Bundesliga Restart | What Have We Learned?

Bundesliga Return: What Have We Learnt So Far?

The Bundesliga became the first major European football league to restart when six games took place behind closed doors on May 16. There was an eerie atmosphere inside Borussia Dortmund’s empty Wesfalenstadion as they thumped rivals Schalke 4-0 on the first day back, but TV audiences relished the opportunity to watch world-class stars in action once again. The Bundesliga has now served up four rounds of exciting fixtures since the restart. It has paved the way for the Premier League, La Liga Primera and Serie A to follow suit, and results in Germany may provide some clues as to how the remainder of the 2019/20 season may unfold elsewhere. This is what we have learned since the Bundesliga returned:

Football teams generally stand a better chance of securing victory when they play in front of their passionate home fans. However, supporters are unable to attend games and roar on their heroes during this age of contagion, and that has caused the traditional home advantage to evaporate. Before the coronavirus lockdown, 43.3% of all Bundesliga games resulted in a home win during the 2019/20 season. The away team won 34.8% of the matches, and the remaining 22.9% ended in a draw. Since the Bundesliga returned, the home team has won just 22.9% of the matches, while the away team has won 48.6% of games and the remaining 28.5% ended all square.

Dortmund’s victory over Schalke was the only home win out of six matches on the day the Bundesliga returned. There were away wins for Wolfsburg, Hertha Berlin and Borussia Monchengladbach, while Freiburg battled to a 1-1 draw away at RB Leipzig and Paderborn picked up a point away at relegation rivals Dusseldorf. The following day saw Bayern Munich beat Union Berlin on the road, while Mainz drew 2-2 away at Cologne and then Leverkusen beat Werder Bremen 4-1 in Bremen. There were just two home wins in nine games on the following weekend. A full round of midweek fixtures took place from May 26-27, and once again there were only two home wins from nine matches.

Bayer Leverkusen began the latest round of fixtures with a 1-0 win away at Freiburg on Friday. There were away wins for Hoffenheim, Eintracht Frankfurt and Werder Bremen, before Hertha Berlin and Bayern Munich won at home on Saturday. On Sunday, Borussia Monchengladbach beat Union Berlin 4-1 at home, but then Dortmund secured a 6-1 away win against Padernborn. It means there have been a mere eight home wins from 35 matches since the restart. By contrast there have been 17 away wins and 10 draws.

Several Premier League teams could be impacted if a similar trend develops in England. Everton have taken 1.70 points per game at home this season, compared to just 0.80 on the road. If home advantage is cancelled out, they may struggle. On the flipside, their away form may improve as they no longer have to contend with hostile crowds on their travels. Tottenham, Man Utd and Arsenal also fare significantly better at home than away, and they may no longer be able to rely on their stadiums as impregnable fortresses. 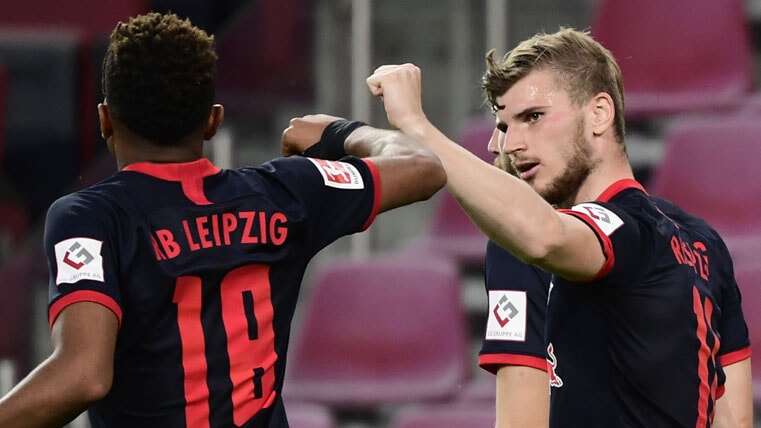 Many of the Bundesliga’s top teams have managed to quickly regain the strong momentum they enjoyed before the season was suspended. League leaders Bayern Munich have won all four matches since the restart and they are heavy favourites in the Bundesliga odds. Bayer Leverkusen have won three out of four games, thanks largely to the scintillating form of Kai Havertz. Dortmund have also won three out of four, with their only defeat coming at the hands of Bayern. RB Leipzig are unbeaten since football resumed in Germany, and Borussia Monchengladbach’s only defeat came against top four rivals Bayer Leverkusen. Those five big teams are pulling clear of their rivals, as you can see in the Bundesliga Points Index when you check out spread betting on the Bundesliga.

At the other end of the table, the relegation threatened teams have also enjoyed some strong results since play resumed. Werder Bremen remain second from bottom, but they have picked up seven points from their last three games. Bottom club Paderborn battled to three consecutive draws before that defeat to Dortmund on Sunday, while Fortuna Dusseldorf gave also managed to pick up some impressive results.

It is the clubs sitting in mid-table that have really struggled to find form since the season started up again. Schalke have lost all four games so far. Cologne were on fire before the break, but they suffered a string of dreadful results in May. Freiburg and Union Berlin have also seen their form nosedive. Hertha Berlin are the only mid-table club to enjoy a strong spell of form since the Bundesliga returned.

It suggests that motivation is a serious issue for mid-table clubs. They are not battling for a European place and they have a reasonable lead over the teams battling relegation, leaving them drifting aimlessly towards the end of the campaign. However, some of these clubs could swiftly be sucked into a relegation battle if the teams below them continue to defy expectations in the weeks ahead. Premier League sides like Southampton and Newcastle should pay close attention to recent developments in Germany, as they too could be dragged into the relegation scrap if they lack motivation when the season resumes.

Bundesliga clubs have been permitted to make five substitutions per game since play resumed following the coronavirus lockdown. Teams are normally limited to three changes per match, but Bundesliga chiefs adjusted the rules to allow the clubs to manage a busy schedule during the summer months. Many players clearly lack fitness following the long break, and they grow fatigued quicker in the heat of summer, so defenders are extremely vulnerable as games wear on. The ability to bring on several quick, dynamic forwards in the second half is a significant advantage.

It is perhaps unsurprising to see Bayern Munich crushing their opponents right now. They were in fine form before the break, but they look even more formidable since the Bundesliga returned. Bayern have the most impressive squad depth in the league, and they can bring on some terrifying impact substitutes after the break. Hansi Flick is able to throw on the likes of Ivan Perisic and Serge Gnabry to run at tired defenders, causing them all sorts of problems and keeping their rivals pinned back. He can also introduce Javi Martinez and Lucas Hernandez to tighten the defence and midfield, allowing them to close out victories.

Dortmund, RB Leipzig and Bayer Leverkusen also boast large, talented squads, and they are able to rotate key players during the congested fixture period. Teams with smaller squads, such as Mainz, Union Berlin and Freiburg, have struggled since the restart. It is also interesting to note that Union Berlin have the oldest squad in the league, and they have been ripped apart since the restart. Burnley have the oldest squad in the Premier League, and it is also among the smallest, so they could be impacted when top-flight football returns in England. The Clarets are 12 points clear of the drop zone, and unbeaten in five games before the break, but Sean Dyche will need to fire up his troops for their final nine matches.

What have you made of the Bundesliga return so far? Will the Premier League and other European leagues follow the same trends when they return? Join in with all of the action from the world of sport with our latest sports spread betting markets and fixed odds pages.

This summer, Southgate should have led his England troops into Euro 2020. Games were set to take place across the continent...
Read more