The Champions League final is the showcase game of the season and it regularly attracts more than 350 million viewers from across the globe. Football fans have been treated to a number of thrilling clashes over the years, featuring many of the greatest players of all time. These are the seven most memorable finals since the European Cup rebranded as the Champions League in 1992:

This was easily the most thrilling Champions League final of the past 28 years. A star-studded AC Milan side raced into a 3-0 lead thanks to an early Paolo Maldini strike and a brace from Hernan Crespo. The game was effectively over at half-time. Milan’s back four featured Maldini, Alessandro Nesta, Jaap Stam and Cafu, with Gennaro Gattuso and Andrea Pirlo sitting in front of them, so a Liverpool comeback seemed inconceivable.

Yet captain fantastic Steven Gerrard began an epic fightback when he latched onto Jon Arne Riise’s cross and looped a header over Dida. The Reds looked a lot brighter following a switch to a 3-5-2 formation, with Dietmar Hamann coming on as a holding midfielder and Gerrard playing in an advanced role. Vladimir Smicer crashed in a long-range effort to make it 3-2, and Milan began to panic.

Gattuso brought down Gerrard in the area, giving Xabi Alonso the chance to equalise from the spot. His penalty was saved, but the Spaniard fired in the rebound to make it 3-3. Milan poured forward in search of a winner, but Jerzy Dudek performed heroics in the Liverpool goal, and the game went to a penalty shootout.

Serginho and Pirlo missed for Milan, while Riise missed for Liverpool. Smicer buried his penalty to make it 3-2 to Liverpool, leaving the decisive spot-kick to Andriy Shevchenko. He slammed it straight down the middle, and Dudek stretched out his left hand to make the save, sending Liverpool fans into raptures and the Champions League title back to Merseyside. 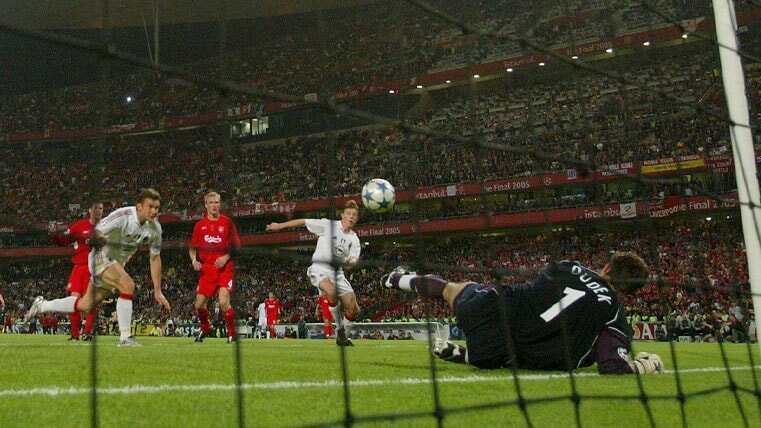 An intriguing clash of styles ensued when city rivals Real and Atletico locked horns in the 2014 final. Los Blancos were bidding for La Decima, their 10th triumph in Europe’s premier competition, and they boasted a terrific team led by Cristiano Ronaldo, Gareth Bale and Karim Benzema. They were the favourites in the football spreads, but a stubborn, well-drilled, supremely organised Atletico side stood in their way.

Diego Simeone prepared his troops for a war of attrition, and they swarmed all over the Galacticos in the opening stages of the game. A looping header from Diego Godin handed Atletico a 1-0 lead in the first half, and then set about protecting that lead as if their lives depended on it. Real grew increasingly frustrated as the game wore on, and it remained 1-0 at the end of the 90 minutes. Atletico had one hand on the trophy, but in the 93rd minute, Sergio Ramos rose highest and sent a pinpoint header past Thibaut Courtois.

Atletico were utterly deflated. They ran out of steam in extra-time, and Real ran riot. Bale headed in after Courtois could only parry Angel Di Maria’s vicious strike, and a left footed shot from Marcelo made it 3-1 in the 118th minute. At the end of extra-time, Gabi brought Ronaldo down in the box. He climbed to his feet and banged in the penalty to make it 4-1 and secure La Decima.

This game represented the pinnacle of Pep Guardiola’s trophy-laden tenure as Barcelona manager. They won by a two-goal margin, but that scoreline flattered Man Utd. Barca enjoyed 68% of the possession, and had 22 attempts on goal compared to United’s four. Sir Alex Ferguson left Paul Scholes on the bench and deployed Park Ji-Sung alongside Michael Carrick in a bid to contain Barca’s legendary midfield, but Xavi, Andres Iniesta and Sergio Busquets were unplayable.

Xavi played in Pedro to put Barcelona 1-0 up on 27 minutes, but Wayne Rooney fired in an equaliser seven minutes later. It was completely against the run of play, but somehow the Red Devils managed to go in level at the break. Barca simply reasserted their dominance in the second half. Lionel Messi fired home from 20 yards to give them the lead, and David Villa wrapped up a fine victory with a curling strike in the 69th minute. Ferguson then threw on Scholes, but it was too late for him to drag United back into proceedings, and Barca were crowned champions of Europe once again.

This was one of the greatest underdog triumphs in European history. Defending champions Juventus were the heavy favourites in the football odds after they swept aside Ajax in the semi-finals. Zinedine Zidane was the star of the show, but Didier Deschamps played the crucial “water carrier” role behind him, while Christian Vieri, Alessandro Del Piero and Alen Boksic provided plenty of quality up front. It was just Dortmund’s second appearance in the competition and they had few superstars apart from captain Matthias Sammer and midfield maestro Paulo Sousa.

Few viewers gave them a chance, but Dortmund were magnificent. Scottish midfielder Paul Lambert performed a heroic man-marking job on Zidane, and Karl-Heinz Riedle scored a first-half brace to put his team 2-0 up. Del Piero pulled one back after the break, but Dortmund local Lars Ricken killed off any hopes of a comeback when he chipped Juventus goalkeeper Angelo Peruzzi from 20 yards. He had been on the pitch for just 16 seconds after replacing Stephane Chapuisat.

Late drama helped Man Utd complete an unprecedented treble in 1999. They had already pipped Arsenal to the Premier League title by a single point, and brushed Newcastle aside in the FA Cup final, but their clash with Bayern was their greatest challenge. The German champions had an extremely strong team, featuring the likes of Oliver Khan, Lothar Matthaus, Stefan Effenburg and Carsten Jancker. Man Utd were without key midfielders Roy Keane and Paul Scholes, which gave them a mountain to climb.

Mario Basler put Bayern 1-0 up after just six minutes, and the Germans delivered a supremely composed performance for the rest of the game. Ferguson brought on Teddy Sheringham and Ole Gunnar Solskjaer in the second half as United desperately sought an equaliser. Bayern continued to repeal them, until the Red Devils won a corner in the 90th minute. United goalkeeper Peter Schmeichel went up for it, and David Beckham floated the ball into the box. Thorsten Fink’s clearance landed at the feet of Ryan Giggs. His right-footed strike went straight to Sheringham, who turned it in. 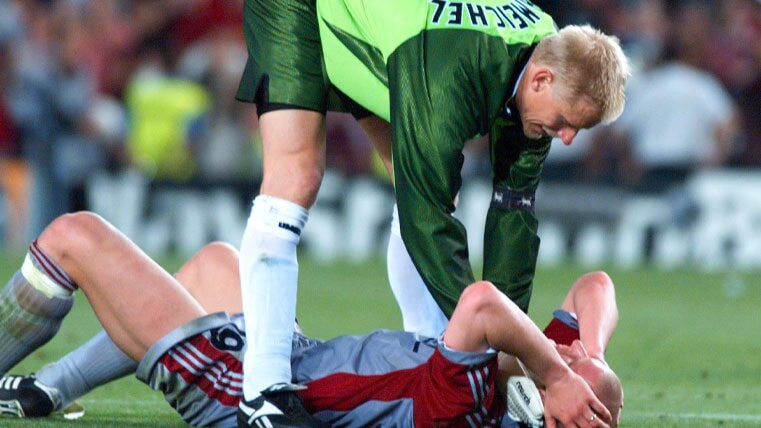 Just 30 seconds after the restart, United forced another corner. This time, Schmeichel stayed put. Beckham swung in the corner, Sheringham flicked on and Solskjaer reacted quickest, turning the ball into the roof of the net. Cue pandemonium among the United faithful, and abject despair for Bayern.

Barcelona were the heavy favourites to be crowned champions of Europe for the second time in three years when they travelled to Athens in 1994. They had just wrapped up a fourth consecutive La Liga title, and their team was packed full of superstars, including Pep Guardiola, Romario, Hristo Stoichkov and Ronald Koeman. Milan were in disarray, with central defenders Franco Baresi and Alessandro Costacurta suspended and star striker Marco van Basten injured.

Regulations at the time limited teams to just three overseas players, forcing manager Fabio Capello to leave out Brian Laudrup, Jean-Pierre Papin and Florin Raducioiu. Barca left out Michael Laudrup in order to field Romario, Stoichkov and Koeman, but they were still expected to destroy an understrength Milan. Yet nothing went to script. Paolo Maldini slotted into central defence alongside Filippo Gallo, and they were solid as a rock. Daniele Massaro scored twice in the first half to hand Milan a comfortable lead, and second-half goals from Dejan Savicevic and Marcel Desailly handed Milan a handsome victory.

The first all-Premier League clash in the Champions League final had everything. It was an end-to-end encounter featuring two of the greatest teams English football has ever seen. Chelsea had an outrageously strong spine featuring Petr Cech, John Terry, Ricardo Carvalho, Claude Makelele, Michael Ballack, Frank Lampard and Didier Drogba. Man Utd had the most terrifying attacking triumvirate imaginable, with Cristiano Ronaldo, Wayne Rooney and Carlos Tevez all in peak form, plus superstars like Paul Scholes and Rio Ferdinand.

They provided a thoroughly entertaining spectacle. A bullet header from Ronaldo handed United the lead, but Lampard levelled the scores. Both sides had chances, but Chelsea really grew into the game, and Drogba and Lampard both hit the woodwork. In extra-time, Terry blocked Ryan Giggs’ goalbound shot, and Drogba was sent off, but still nothing could separate these titans. Penalties were required, and United goalkeeper Edwin van der Sar emerged as the hero. He stopped Nicolas Anelka’s effort, and then Terry slipped while missing the decisive spot-kick, leading Man Utd to be crowned champions of Europe once again.

Can You Name The Champions League Winners Since 1999?

Read on to check out our reviews of some of the most dramatic Cricket World Cup finals ever...
Read more

A blessing for some teams and a curse for others? These are the biggest winners and losers from the postponement of the Euros...
Read more