The world’s leading jockeys, trainers, stayers and chasers defied coronavirus fears to deliver a thoroughly entertaining Cheltenham Festival last week. More than 250,000 hardy punters piled into the famous racecourse to watch the action unfold over four gripping days, and they were treated to a number of thrilling contests. These were the seven most memorable moments of the festival:

Al Boum Photo ended Willie Mullins’ long wait for a Gold Cup triumph when he soared to an unlikely victory in 2019. Now the Closutton maestro has two victories under his belt after Al Boum Photo defended his crown with a classy performance on Friday. He finally overhauled the dogged Lostintranslation as they went over the final fence and then held off a spirited late charge from Santini to edge a narrow victory. It was a fine effort from Paul Townend, who would go on to be crowned leading jockey at the festival, and it ensured that Al Boum Photo became the first back-to-back winner of the Gold Cup since the legendary Best Mate in 2004. Mullins said he will go for the hat-trick next year, so Al Boum Photo is sure to feature prominently in the horse racing odds.

Sporting Index brand ambassador Barry Geraghty enjoyed a perfect start to the festival as he steered Champion Hurdle favourite Epatante to victory. The 40-year-old icon has broken all four of his limbs during a riding career that has spanned more than two decades, but he is still winning big races on a regular basis.

Epatante could well be a horse to keep him in the saddle for a few more years, as she absolutely breezed to victory in the most prestigious hurdling event in the National Hunt calendar. She is also likely to be among the favourites in the betting for this big race next year.

Champ Lives Up to His Name

The RSA Chase was possibly the most thrilling of all the races at Cheltenham this year. It looked like a two-horsed race between favourite Allaho and second favourite Minella Indo as they enjoyed a huge lead over the chasing pack after clearing the final fence. Champ was well off the pace, but he somehow managed to make up a nine-length deficit, reel in his two rivals and cross the line first. 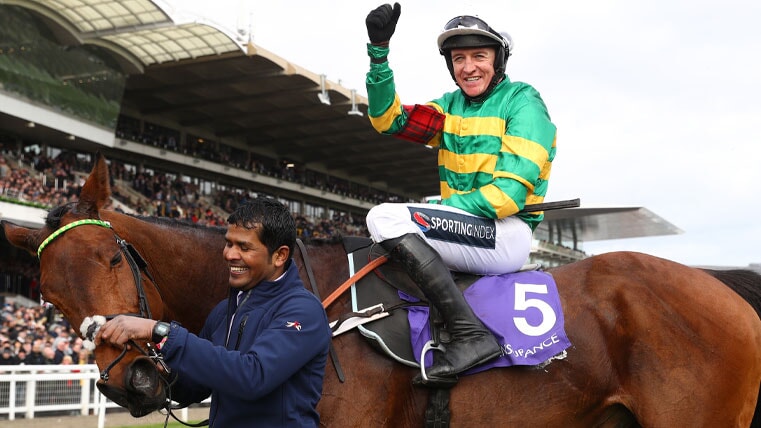 Geraghty was left beaming after that late burst. “He is a gorgeous horse, definitely one for the future,” he said. “It was a great performance to get back from a compromised position.” Geraghty also rode Dame De Compagnie and Sire Du Berlais and Saint Roi to victory during the festival.

Defi Du Seuil was the heavy favourite for the Queen Mother Champion Chase on day two of the festival after reigning champion Altior was forced to withdraw. Philip Hobbs’ seven-year-old was in terrific form and he had lit up Cheltenham with a sensational performance in the JLT Novices’ Chase the previous year, so many commentators expected him to secure a comfortable victory. Politologue had not won a race since November 2018, so he flew under the radar somewhat in the build-up to the Champion Chase. However, last year’s runner-up went one better this year, as he led from start to finish, leaving his rivals firmly in the shade. It was his first ever Cheltenham Festival victory, secured on the fifth time of asking, and Harry Skelton deserved great credit for nailing the tactics and dictating the pace of the race.

Lisnagar Oscar was one of the longest priced winners of the entire meeting and he managed to pull it off in one of the biggest races. The Stayers’ Hurdle is the main event on day three – St Patrick’s Thursday – and the leading long-distance hurdle event in the National Hunt calendar. Paisley Park cruised to victory in 2019 and many expected him to regain his crown this time around with minimal fuss.

However, Lisnagar Oscar was in defiant mood, and he made smooth progress on the near side before seizing the lead before the final fence and then galloping strongly up the hill to secure a three-length victory. He came into the festival on a seven-race winless streak, but he saved his best performance for the big occasion, leaving many viewers stunned.

There was heartbreak for experienced rider Jamie Moore in the Triumph Hurdle on the final day of the victory. His mount, Goshen, opened up an unassailable lead at the front of the field and he looked all set to breeze to one of the most convincing victories of the entire meeting. Then disaster struck. Goshen clipped the final hurdle and Moore was catapulted from his saddle, bringing his race to a premature end. Burning Victory went on to win it for Mullins, who said he would not celebrate with much enthusiasm, as he felt so bad for Moore. The crestfallen rider apologised to “everyone I let down”, and he was consoled by 20-time champion jockey Sir AP McCoy after the race.

Two of the finest mares in the world engaged in a thrilling battle at Cheltenham this year. Benie Des Dieux went into the Mares’ Hurdle as the clear favourite after winning in 2018 and running well before an uncharacteristic fall last year. However, she came up against Henry De Bromhead’s in-form six-year-old, Honeysuckle, who had won all seven previous races. The stage was set for an intriguing clash, and they duly delivered. Honeysuckle travelled really well for the majority of the race, but Benie Des Dieux looked almost certain to overwhelm her with a late burst. Yet Honeysuckle then quickened round the home turn to snatch the advantage and she held off Benie Des Dieux in a titanic battle up the straight to win by half a length.

We take a look at all you need to know about the AFL in 2020, including all of the contenders & players to watch...
Read more