Cheltenham Festival Market Insights: How Things Stand Ahead of Next Week’s Off

We are now just days away from the biggest National Hunt meeting of the year and excitement is soaring among punters. A great deal of antepost betting has already taken place on the Cheltenham Festival, and the odds on the various runners have shifted significantly in recent weeks. This is the current state of play:

The spread of the novel coronavirus has sparked mass cancellations of major sporting events across the world. The weekend’s scheduled Six Nations match between Ireland and Italy is off, Serie A games have been postponed, the MotoGP season opener has been shelved in Qatar and even the Olympics could be delayed. However, right now Cheltenham is set to go ahead. Public Health England announced its crisis response plan on Thursday, and it did not mention any immediate need to postpone sporting events. Last week Cheltenham Racecourse said in a statement that it remains “full speed ahead for the festival”, and it confirmed this week that its position has not changed. Some Irish visitors may not travel to Prestbury Park, but right now there are no plans to hold it behind closed doors or scrap the meeting.

The legendary Altior roared back to form with victory in the Game Spirit Chase on Super Saturday at Newbury last month. It followed a difficult season for the 10-year-old, who stepped up in trip in a bid to win the King George on Boxing Day. However, his 19-race winning streak came to an end with a defeat to 2m 5f specialist Cyrname at Ascot in November. Nick Henderson then decided that Altior should return to his usual 2m distance, and he delivered a superb finish to win at Newbury. He now heads the betting for the Queen Mother Champion Chase, which he is bidding to win for the third time in a row. Last year he went off at just 4/11, but now he is priced at 15/8 in the horse racing odds. That leaves him narrowly ahead of the dangerous Defi Du Seuil in the betting, while Chacun Pour Soi is currently 5/2.

Henderson spooked the betting markets last week when he revealed that Champion Hurdle favourite Epatante had developed a cough. He said he was hopeful that it would not interfere with her Champion Hurdle preparation, but she drifted out to 9/2 in the Sporting Index odds. Now Henderson has assured everyone that she is in “fantastic” form. “She coughed for two days and as soon as I said something, she never coughed again,” said Henderson. “She’s 100% and has been ever since. I thought I’d better say something before some rumour gets out. She literally never coughed again.” Epatante has now gone back in to 3/1 to win the Champion Hurdle.

Sporting Index brand ambassador Barry Geraghty is also hopeful there will be nothing to worry about with Epatante. 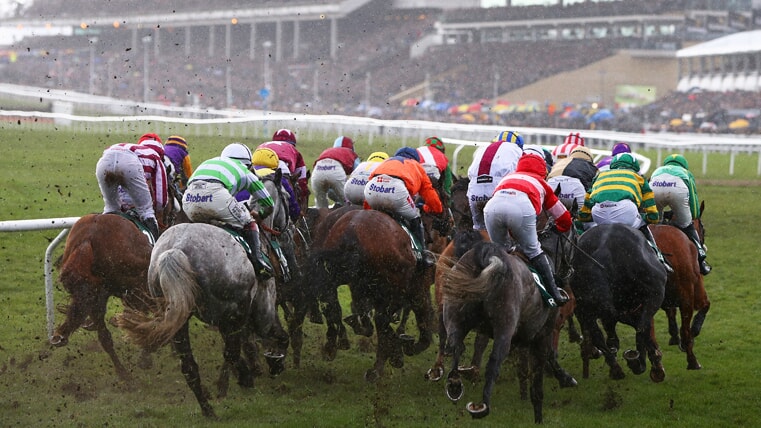 Right now, just two horses are odds-on to secure victory at Cheltenham. Benie Des Dieux is priced at 8/11 to win the Mares’ Hurdle, while Paisley Park is 4/6 to win the Stayers’ Hurdle. His triumph last year was a heart-warming moment. Owner Andrew Gemmell was born blind, but developed a love of racing by listening to it on the radio, and his dream was fulfilled when Paisley Park clinched victory in the Stayers’ Hurdle. The horse nearly died from a vicious illness a couple of years previously, so it was a really gripping tale, and spectators shed tears at the result. Now Paisley Park will return to defend his crown. He impressed when winning on his season reappearance at Newbury, and trainer Emma Lavelle is full of praise for his development over the past year. “He seems in excellent heart,” she told the Racing Post last week. “He cantered away after his run at Cheltenham and is back in full work. It’s all systems go and touch wood we’ll get there fighting fit for the big race.”

The Gold Cup is the biggest race of the season and it always attracts a great deal of antepost action. Al Boum Photo and Santini head the betting, and the odds on them have been jumping about over the past few weeks. Right now, they are the joint 7/2 favourites. Al Boum Photo surprised many punters by soaring to victory at last year’s Gold Cup, handing Mullins his first ever triumph in jumps racing’s blue riband event. Much of the build-up focused on the three shortest priced hopefuls – Presenting Percy, Clan Des Obeaux and Native River – but they finished eighth, fifth and fourth respectively.

Al Boum Photo had an SP of 12/1, making him one of just two Gold Cup winners with odds greater than 10/1 since the turn of the century. He was immediately installed as the favourite to defend his crown in 2020, and he remains among the favourites after enjoying a strong year. However, the odds have plummeted on Santini after his exploits this season. He was available at 25/1 when the betting first opened, but his price has shortened this year. He stayed on well to win the Grade 2 Cotswold Chase in January, suggesting that he will relish the trip and enjoy the course this month. However, the field looks extremely competitive, with the talented Delta Work at 5/1, Lostintranslation at 6/1, dual King George winner Clan Des Obeaux at 7/1 and the dangerous Kemboy at 15/2, so it promises to be a great race.

Ruby Walsh surprised everyone with his retirement in 2019, and Townend is now the stable jockey for Willie Mullins. He will enjoy his pick of the rides saddled by the Closutton maestro at Cheltenham, and he has been installed as the 2/1 favourite to be named top jockey at the festival. Davy Russell is next in the betting at 7/2, followed by Rachael Blackmore at 9/2 and then last year’s winner, Nico De Boinville, at 8/1. Sporting Index brand ambassador Barry Geraghty is priced at 13/2, and you can find 6/5 on him securing one winner or less, or 4/6 on over one winner. If you think Geraghty will have a great festival, you can take 16/1 on him securing four or more winners.

There are also plenty of exciting Cheltenham spread betting specials to consider. Festival SPs is a prediction on the cumulative starting prices of all the winners at the festival. Festival distances allows you to speculate on the cumulative winning distances in each race, while there are some other intriguing specials to check out, such as Winning Favourites x10. In the fixed odds betting, you can wager on the biggest winning distance and the biggest winning SP among others, so there are plenty of exciting betting options at your disposal this year.

Get set for Cheltenham Festival with our industry leading selection of horse racing spread betting markets and Cheltenham odds.