The world’s great golfers will touch down in San Francisco this week to vie for glory in the first major of 2020. The PGA Championship is always a fiercely contested tournament and it takes a great deal of talent, fortitude and composure to secure victory. We have assessed the winner trends from the competition’s long and illustrious history, while exploring the features of TPC Harding to help you determine who might lift the Wanamaker Trophy on Sunday.

The PGA Championship was a match play event from 1916 to 1957, and it has been a stroke play tournament since 1958. These are the key records:

• Jack Nicklaus and Walter Hagan share the record for the most PGA Championship victories. Hagen won it five times during the match play era, while Nicklaus picked up an impressive five victories during the stroke play era. The Golden Bear first triumphed in 1963, he won it again in 1971 and then added a third in 1973. Nicklaus picked up his fourth PGA Championship crown in 1975 and his fifth in 1980.

• This year Brooks Koepka will bid to become the first modern player to win the tournament three times in a row. Hagen won four on the bounce, but in the stroke play era the record stands at two consecutive victories. Tiger Woods won the PGA Championship in 1999-2000, and pulled off back-to-back victories again in 2006-07. Koepka won it in 2018 and 2019, and now he will aim to cement his greatness with yet another famous triumph. 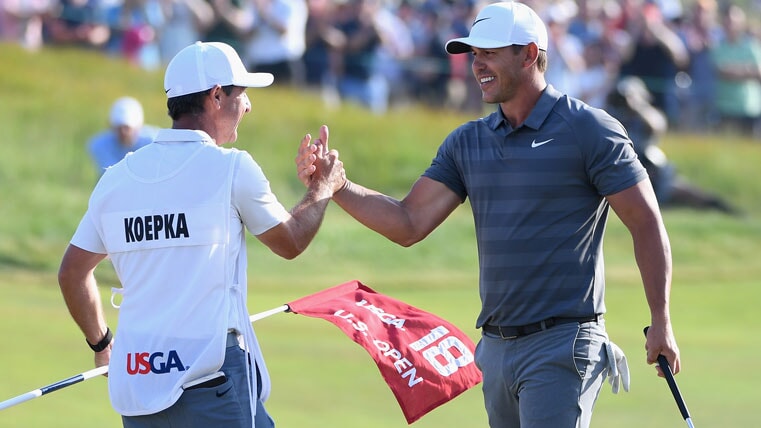 • Gene Sarazen is the youngest ever winner of the PGA Championship. He was just 20 years and 174 days old when he won it in 1922. The likes of Matthew Wolff and Viktor Hovland will aim to become the youngest winner of the modern era when they head to Harding Park this year.

• The oldest winner is Julius Boros, who was 48 years and 142 days old when he clinched it in 1968. Phil Mickelson will aim to snatch that record away from Boros when the 50-year-old veteran tees off this week.

• Jason Day holds the record for the most strokes under par after finishing -20 when he won the 2015 PGA Championship. It is the record under par score in all major championships. That remains the Australian star’s only major triumph, but could this be the week he returns to the summit of the sport? He is an outsider in the golf odds, but his talent is undeniable.

If you delve too far into the history books, the trends have a tendency to become irrelevant, as the game has evolved so much over the years. We have therefore pulled out the key tournament trends from the past decade:

• Eight of the last 10 winners of the tournament were in their 20s. The only exceptions were 2013 champion Jason Dufner and 2016 winner Jimmy Walker, who were both in their 30s. Koepka, Justin Thomas, Day, Rory McIlroy, Keegan Bradley and Martin Kaymer were all bursting with youthful vitality when they were victorious.

• Six of the last 10 winners were American. Northern Ireland’s McIlroy won the tournament in 2012 and 2014, while Germany’s Kaymer and Australia’s Day were the others to break the American monopoly. Americans have won the event for the last four years.

• Eight of the last 10 winners had won a tournament that season. The current season has been disrupted by the Covid-19 pandemic, but there have been several events since the restart, with Daniel Berger, Webb Simpson, Dustin Johnson, Bryson DeChambeau, Collin Morikawa, Jon Rahm and Michael Thompson all winning on the PGA Tour.

There is not a great deal of past form to study at Harding Park, as it has rarely been used for pro events. The last was in 2015, when McIlroy won the WGC-Cadillac Match Play event there. He prevailed in an intriguing final against Gary Woodland, with Jim Furyk and Danny Willet the losing semi-finalists. Paul Casey, Tommy Fleetwood, Louis Oosthuizen and John Senden all reached the quarter-finals, so they have some sort of course form. The previous event held at the course was the 2012 Charles Schwab Cup Championship, won by Tom Lehman.

Harding Park received a $16 million makeover in 2002-03, which lengthened the course. That saw it return to the public limelight, and Woods won the World Golf Championship-American Express Championship there in 2005. Accuracy off the tee is crucial, as it pays to avoid the sticky rough. The final hole is a 468-yard par 4, which wraps around a lake. Big hitters should come into their own on the back nine, provided they can maintain accuracy and composure. Some players will skip the PGA Championship over coronavirus concerns, including Lee Westwood and Padraig Harrington.

You always have to take past winner trends with a pinch of salt. That is particularly true during the current period of global uncertainty, in which there are no spectators, the season has been turned on its head and staying healthy is everyone’s primary concern. However, the recent trends suggest that an American player in his 20s, sitting in the world’s top 25 and with a tournament victory under his belt this season, could prevail.

That could spell good news for the likes of Justin Thomas, Bryson DeChambeau and Morikawa. However, that would mean ignoring the world’s top two players – the Spaniard Rahm and the 31-year-old McIlroy – who are both among the favourites in, along with in-form players such as Johnson and Simpson, not to mention veteran stars like Woods and Mickelson. The field looks stacked with quality, and we have all manner of PGA Championship betting options available to choose from, so check out the golf odds and the golf spreads and grab yourself a stake in the action at Harding Park.