Premier League All Stars Game: How Could This Work?

Would the Premier League Benefit from an All-Stars Game & How Could It Work?

On 6 July, 1933, more than 45,000 baseball fans packed into Comiskey Park in Chicago to watch the first ever MLB All-Star game. Legendary pitcher Lefty Gomez led his American League team to a 4-2 victory over their National League counterparts, and a rich sporting tradition was born. All-Star games are now a staple of the major US sports leagues, but they have never taken off on this side of the Atlantic. Would the Premier League benefit from an annual showdown between the finest players in the land?

How Could a Premier League All-Star Game Work?

American sports are divided into different conferences, so it is easy to split the players into two distinct talent pools. The NBA has dabbled with a new format in recent years, which sees two rival captains picking players from across the league – just like PE teams being selected at school – but the All-Star teams are generally divided by conference. The easiest way to mimic that in the Premier League would be to pit the north against the south. An alternative would be east versus west, but north versus south is a cleaner divide.

However, it throws up a number of questions. Where do you draw the line? Are the Midlands in the north or the south? Who gets Ben Chilwell, Adama Traore, Jack Grealish, Jamie Vardy, James Maddison et al? That debate could rage on and on. Another issue would be how to select the teams. Fans could be encouraged to vote, but that is open to corruption, as Arsenal supporters showed when they voted a relatively underwhelming strike by Jack Wilshere as Goal of the Season a few years back.

Managers could choose the players for each team, but would they be able to pick as many stars as they like from a particular club or would it be capped? An alternative might be to bring in a couple of former Premier League stars – Alan Shearer and Ian Wright, for example, or Gary Neville and Jamie Carragher – and task them with selecting the teams. A stats company like Opta could also get involved in the process, or the Premier League itself could select the players.

However, that would involve leaving out such luminaries as Sadio Mané, Roberto Firmino, David Silva, David De Gea, Ederson, Marcus Rashford, Mason Greenwood, Aaron Wan-Bissaka, Paul Pogba, Bernardo Silva, Fernandinho and many more. You could certainly have an extremely strong bench. Perhaps you would have to choose based on current form, with a significant reliance on statistics.

In the current climate, due to northern clubs’ domination, it might be a better idea to allow The South to have their pick of the best players from the Midlands. You might then go for: Leno; Ricardo Pereira, Lewis Dunk, Davinson Sanchez, Ben Chilwell; N’Golo Kante, Ruben Neves, Christian Pulisic; Pierre-Emerick Aubameyang, Harry Kane, Son Heung-Min. You could then have the likes of Danny Ings, Adama Traore, and Giovani Lo Celso on the bench. 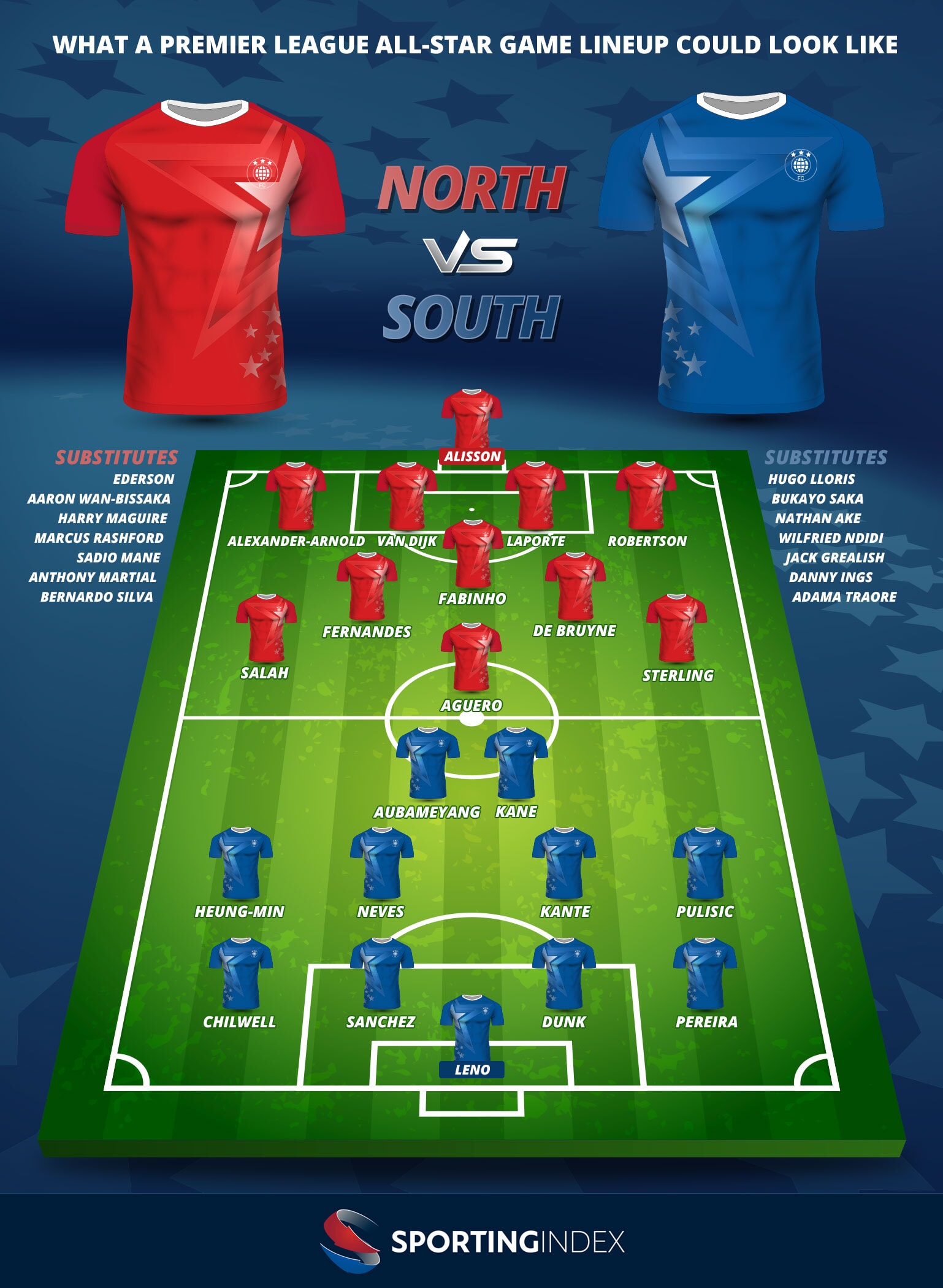 Who Could Manage the Teams?

It would have to be a toss-up between Jurgen Klopp and Pep Guardiola for The North. The most experienced candidate in the south is Jose Mourinho, and it would be exciting to watch him lock horns with his old foe Guardiola in such a high-profile showdown. The managers rotate on an annual basis in many All-Star games, so one year you might have Chris Wilder up against Roy Hodgson, and another year it might be Ole Gunnar Solskjaer against Graham Potter.

Who Would Win a Premier League All-Star Game?

Right now The North would surely crush The South in an All-Star game. Most of the best players in the league are concentrated in Liverpool and Manchester. Man City and Liverpool have dominated the Premier League for the last three seasons, and they are regularly the favourites in the Premier League odds and Premier League spreads, while Man Utd have a number of exciting players these days. However, the balance of power could eventually shift, as Chelsea are making ambitious moves in the transfer market – with Timo Werner and Hakim Ziyech set to join their talented squad – and the likes of Arsenal and Spurs may get their act together at some point.

Would a Premier League All-Stars Game be Popular?

That is the million-dollar question, as our friends across the pond like to say. The NFL Pro Bowl has suffered from a distinct lack of interest in recent years due to the perceived lack of quality. Players are keen to avoid injury, so they do not put in a great deal of effort, and it feels like a pre-season friendly or an exhibition match. The NBA All-Star game is a bit more exciting, and it is always extremely high-scoring, but it is not exactly a highlight of the calendar year. A Premier League All-Stars game would certainly be popular among fans across the world if it launched in the years ahead. However, the novelty could soon wear off, and viewing figures might wane if the game lacked intensity on an annual basis.

An alternative might be to pit a Premier League All-Stars side against La Liga All-Stars, Serie A All-Stars and Bundesliga All-Stars. That would be a thrilling prospect. Imagine the Premier League’s finest stars going up against a team featuring the best players from Barcelona and Real Madrid, with a smattering of battle-hardened Atletico Madrid players thrown into the mix. That would attract a great deal of attention. UEFA could create an added incentive by offering an additional Champions League place to the league that prevailed, which would certainly help ensure the action remained competitive.

Premier League clubs would be furious if their best players were injured while competing in an All-Star game that does not benefit them in any way. They react with apoplexy when their highly-paid stars are crocked on international duty, so you can only begin to imagine how disgruntled they would be if an All-Star game robbed them of the services of their top players for the season. We could end up with a situation whereby several stars pull out of the game as a result of mysterious injuries, which miraculously clear up in time for the next league fixture, or simply pulling out of tackles throughout the match. Premier League clubs are powerful, and they have every right to be protective of the players that they pay so handsomely, so their objections could well scupper any chances of an All-Star game taking place.

Should We Have an Annual All-Star Game?

A Premier League All-Star game would certainly whip up considerable intrigue, excitement and debate among fans. However, it would be difficult to justify hosting an annual showpiece event of that nature. The league’s best players already compete in the Champions League and represent their national teams, which provides them with ample opportunities to impress on an alternative stage to the Premier League. They also have the FA Cup and the EFL Cup, creating an extremely congested fixture schedule.

The NBA All-Star Weekend and NFL’s Pro Bowl will not necessarily translate into the sporting culture on this side of the Atlantic. There would be resistance among many fans, who would be uneasy with the idea of an American influence. Those games are also losing support Stateside, as the players do not take them all that seriously. They are proud to be named as NBA All-Stars, but their performances in the actual game do not really resonate. The Premier League clubs would probably represent the final nail in the coffin, as they would object to the prospect of their stars picking up injuries.

The only way to make it work would be to create a clear incentive for all the players to take the game seriously, and to set aside a substantial sum of money to compensate clubs in the event of injuries. Corporate sponsors might lap up the idea of the game, a broadcasting deal could be secured without too much trouble, and many fans would tune in to watch the action unfold, but guaranteeing a quality match is another matter entirely. It is unlikely that we will have a Premier League All-Star game any time soon, but it would certainly be an intriguing clash between north and south.

We look at 10 key findings since the Premier League returned to action behind close doors...
Read more

We look back and rank England's managers of the past 20 years, where there have been several ups and downs.
Read more

The latest news from the cricket season and how the County Championship and T20 may look this Summer...
Read more

With us all temporarily living in an age of behind closed doors sport. We look back when crowds made all the difference.
Read more