England captain Eoin Morgan admitted his side were “way off the mark” as they slumped to a heavy defeat in South Africa on Tuesday. It was the ODI team’s first match since winning the World Cup on home soil last year, and expectations were high among the travelling fans. However, England failed to live up to their status as the world’s number one side, as Quentin De Kock’s century led the Proteas to a seven-wicket victory. These are the seven things we learned:

The tourists were without World Cup winners Jofra Archer, Mark Wood, Jos Buttler, Adil Rashid and Ben Stokes for the first ODI in Cape Town. Some were injured, while others were rested, and England were significantly weakened by the absences of so many key players. They clearly lack strength in depth in the 50-over format.

The most glaring issue was a lack of pace. Archer and Wood were badly missed, and the guile of Liam Plunkett and Rashid could have come in handy during the middle overs. England have rested Archer and Wood for this series, while they have dispensed with Plunkett, but Rashid is on the tour and he should be brought back into the team as a matter of urgency.

England were the 18-28 favourites pre-toss in the cricket spread betting, but they ended up slumping to a heavy defeat, which certainly caught our traders by surprise.

Chris Woakes was the only member of the World Cup bowling attack to feature, and he was suitably economical with the ball, but Sam Curran, Tom Curran, Chris Jordan and debutant Matt Parkinson all struggled to make an impact.

Sam Curran had a pretty ordinary day with both bat and ball, scoring just seven off 18 balls, and bowling five wicketless overs for 28 runs. That left him with a player performance make up of 7, which was well below his pre-match quote of 41-46.

Joe Denly provided the only real positive for England, as he managed a valiant 87 to keep their hopes alive. Yet South Africa ended up chasing England’s 258-8 with 14 balls to spare, thanks largely to the tourists’ toothless attack.

Morgan initially said there were no excuses for England’s heavy defeat in Cape Town. However, he went on to suggest that rustiness could have impacted upon his side’s chances of putting up a more impressive score. “We knew it wasn’t going to be an absolute run-fest, but every batsman – apart from Denly and Woakes – really struggled to get going, which probably emphasises we are a bit rusty,” he said.

This was the ODI team’s first match in almost seven months and they were caught cold by an inspired bowling display from the hosts. They should be better prepared for the second ODI, which takes place in Durban on Friday. 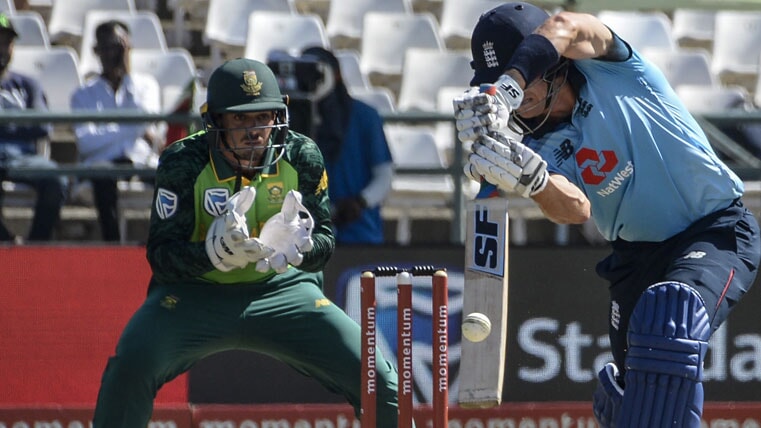 There will be an inquest, as England now risk suffering a first series defeat in three years. Morgan is likely to strengthen the team for Friday’s match, and some players may well be sharper next time out after getting a bit of playing time under their belts.

This was De Kock’s first game as full time captain and the jury was out on his leadership skills. He has a simplified, somewhat carefree approach to the game, and that led some to predict that he would struggle in a leadership role.

De Kock is also the opener and the wicket-keeper for his team, which leaves a great deal of responsibility resting on his shoulders. However, he made light work of the burden as he delivered a majestic, frictionless century off 106 balls.

The 27-year-old was in a class of his own with the bat on Tuesday, and he also marshalled his bowlers extremely well. He made a mockery of any suggestions that he is not up to the task of leading this team, and it will be interesting to see if he continues to excel in Friday’s showdown in Durban.

South Africa endured a dismal World Cup campaign last year. They went into the tournament as one of the favourites to lift the trophy, but they suffered a 104-run defeat against England in the opening game and that set the tone for a disastrous tournament. They ended up losing five of eight matches and they finished seventh in the standings.

It was clearly time for an overhaul. Coach Ottis Gibson was shown the door. Stalwarts Faf Du Plessis and Kasigo Kabada have been rested for this series, allowing a new generation to come to the fore under De Kock’s leadership.

They could not have wished for a more perfect start to a brave new era. Thrashing the world champions in front of a raucous home crowd is a great way to embark upon a new dawn, and home fans will have high hopes for further glory in future.

Temba Bavuma came in at number three to replace Du Kock, and he delivered a magnificent performance. He hit 98 and put together a partnership of 173 with De Kock, making mincemeat of England’s under-strength attack.

Bavuma has been stung by suggestions that he is only in the team as part of Cricket South Africa’s transformation policy, which aims to include black players in the team in order to redress the imbalances of the apartheid era.

“Yes, I am black, that's my skin,” he said after the match. “But I play cricket because I love it. I’d like to think the reason I am in the team is because of performances I have put forward in my franchise side, and also for the national team, whenever I have been able to.”

His performance proved his place in the team is based totally on merit. Bavuma’s runs quote was pitched at 33-38 before the match, and he made 98 in only his third ODI.

England Must Quickly Adapt to Conditions

Morgan admitted that his team struggled to adapt to the conditions in Cape Town on Tuesday. “We did our best to adapt but the skill level wasn’t there,” he said.

It was a slow pitch and England struggled to assert themselves on the game with both bat and ball. Our pre-match multi-sixes quote was 23-28, and the match only made up six, thanks largely due to a pitch that was a lot slower than expected before the game.

It is worth noting – as is often the case at Durban – that the next game is expected to be heavily affected by rain, so our performance markets may well be reduced.

England are the clear favourites to win the second ODI, priced at 4/7 in our cricket odds. However, they will need to quickly adapt to these testing conditions if they are to pull level in the series and tee up a decider at Wanderers Stadium on Sunday.

What did you make of England’s first ODI performance? Will Morgan and co. be able to turn things round? Make sure you check out our best cricket spread markets and top cricket betting markets for all of the best and latest odds and offers from the world of sport.