UK General Election Final Countdown - What Were The Key Moments of the Election?

Six weeks of intense campaigning are drawing to a close and the main political parties are left to nervously await the results of the general election. Our traders now predict that the Conservatives will seize control of the House of Commons by gaining the majority they so desperately crave.

When the election was announced at the end of October, the Sporting Index trading team predicted the Tories would secure just 324 seats, which would have left them two short of a majority. At the time, Labour were predicted to win 204 seats, while the traders thought the SNP would secure 50, the Lib Dems would take 45, Plaid Cymru would win five, with three for the Brexit Party and two for the Greens.

Now our traders foresee Labour gaining 214 seats – 10 more than the initial projections – but the SNP are now pitched at 40, with just 20 for the Lib Dems, four for Plaid Cymru, one for the Brexit Party and one for the Greens in the political spread betting. That would leave the Tories with 348 and a mandate to "get Brexit done". These are the key events that caused the predicted seats spread to shift:

The Brexit Party were tipped to be a major thorn in the Conservatives’ side during the 2019 election campaign. Their hardline stance on leaving the EU saw them win 29 seats in the European elections in May, while the Lib Dems took 16, Labour won 10, the Greens took seven and the Conservatives only managed to win four. That inspired the Tories to install Johnson as their leader in order to see off the threat of Farage. The eurosceptics have emerged as the dominant force within the Conservative Party under Johnson’s leadership.

He reiterated his determination to see Britain leave the bloc by 2020, while pursuing a Canada-style trade deal, and that was enough to inspire Farage into drastic action. Farage announced that the Brexit Party would not field any candidates against the Conservatives in the 317 seats they won at the last general election. He concluded that every seat it contested could split the vote and usher in dozens of Liberal Democrat MPs and, in turn, create the circumstances for a second referendum. This was a massive shot in the arm for the Conservatives, and it allowed them to focus on crushing the Lib Dems.

Within 12 days the polls had the Tories ahead by a healthy margin of 19 points. The pollsters have been wide of the mark in recent elections, but they have consistently showed Conservative dominance throughout the current campaign. By November 23, 47% of those polled by Opinium for the Observer backed the Conservatives, with Labour on 28% and the Lib Dems falling back to 12%. These results suggested that the televised debates between the party leaders did not make an immediate impact on the race, as Jeremy Corbyn and Jo Swinson failed to significantly outfox Johnson in the televised leader debates.

The Labour Party published its manifesto to great fanfare on 21 November. Left-leaning commentators lauded its ambition to increase the size of the state to its largest since World War II, but opponents savaged it for its populist flourishes and branded Corbyn a fantasist who would ruin the British economy. Three days later, the Tories unveiled their manifesto with a lot less pomp, and it appeared to be a masterpiece in playing it safe and avoiding any controversy. They seemingly learned from Theresa May’s disastrous manifesto and stripped out anything that would generate negativity. The chief pledge was to “get Brexit done” and in an age where popular slogans carry great weight – Make America Great Again and so on – it seemed to chime with voters. 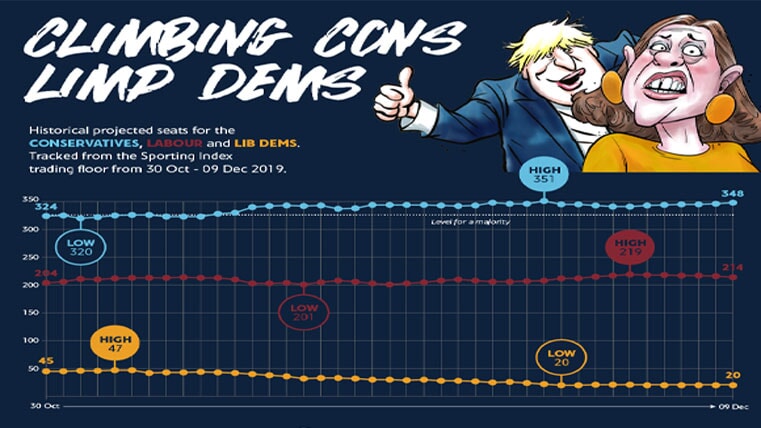 Chief Rabbi Ephraim Mirvis savaged Labour over its failure to root out the “poison” of anti-Semitism within the party. It followed the resignation of prominent Jewish Labour politicians, including Luciana Berger and Louise Ellman, while a front-page article published by The Jewish Chronicle pleaded with the British public not to vote for Corbyn. This issue has dogged Labour through his leadership and it could have helped prevent the party from making further gains during the election campaign.

Former Lib Dem leader Vince Cable called the party’s policy to scrap Brexit without another referendum “a distraction and not a very helpful one”. He said the party should instead have campaigned for a second referendum while supporting remain, which is what the Greens decided. The Lib Dems’ early momentum fizzled out, with Labour constantly attacking their record after forming a coalition with the Tories in 2010 and the Conservatives attacking them for going against the will of the British public.

Johnson has spent the past couple of weeks actively avoiding a grilling from the BBC’s Andrew Neil. Corbyn, Swinson, Farage and co have subjected themselves to a sit-down with Neil, and his tough line of questioning has generally yielded a string of negative headlines. The Tories do not want to see clips of Johnson struggling under scrutiny from Neil – who has pledged to hold the Prime Minister to account over whether he can be trusted – and they have simply ignored the requests, breaking decades of tradition.

Neil looked down the camera on December 5, addressing an audience of millions, and challenged Johnson to face the showdown. The following day the Conservatives branded the format as “tired and broken” and told the BBC to go away. Johnson has not faced the grilling and instead he sat down for a more pleasant chat with Philp Schofield and Holly Willoughby on the This Morning sofa. Some branded him a coward, but Johnson’s popularity does not appear to have been unduly damaged by the saga.

Election contests typically boil down to popularity contests between the party leaders, as voters opt for the one they like the most. This election appears to be more about who voters dislike the least, as none of them inspire much popularity.

Opinion polls consistently suggest Jeremy Corbyn is the most unpopular leader of the Opposition since pollsters first asked the question in the 1970s. Many commentators suggest that a less polarising opposition leader would wipe the floor with Johnson following nine years of austerity from the Conservatives.

Yet it seems to be Swinson whose popularity levels have diminished to the greatest extent during this election. Panelbase polls saw her approval ratings drop from -12 in October to -21 by the end of November and then -30 by 8 December. The more voters see of Swinson, the less they like her, and that has inspired the traders to wield the axe upon the Lib Dems’ seat prediction. We now have a situation where support for the fringe parties has seemingly evaporated, leaving the traditional heavyweights to slug it out. Voters do not trust Johnson, but they appear to be even more fearful of Corbyn getting the keys to number 10, and that is why our traders are predicting a Conservative majority. Labour have gained 10 seats in our traders' projections.