“Some people think football is a matter of life and death,” said legendary Liverpool manager Bill Shankly. “I assure you, it’s much more serious than that.” Whether it is football, tennis, cricket, golf, boxing or a game of snooker, sport whips up fierce loyalty and devotion among millions of people. Every year they veer from joy to heartbreak as they follow the exploits of their favourite teams and players. Sport captivates, entertains and excites people, and these emotions are massively ramped up when you have money riding on the outcome. Fixed odds betting is the most popular form of wagering, but there is another thrilling, tantalising option available to sports fans: spread betting.

How Does Spread Betting Work?

Spread betting is extremely exciting, as every market is teeming with a huge number of possibilities. When you place a fixed-odds bet, you either win or lose a pre-determined amount. But with a spread bet, your payout increases depending on how strong your prediction proves to be. It allows you to capitalise on your sporting expertise, while it keeps you utterly captivated until the full-time whistle.

Our traders will price up a number of markets on a match or a tournament, and you simply have to decide whether they have been too bold or too cautious in their projections. In each instance, you will be presented with a price at which you can buy and a price at which you can sell. The difference between them is the spread. You either buy on the upper limit if you think our traders have pitched it too low, or sell at the lower limit if you think they have been too ambitious in their prediction. The more right you are, the more you win. Many punters love sports spread betting , because it offers the possibility to make a far greater profit from a single stake than fixed-odds betting. But you have to be careful, because you can also incur greater losses if your bet is unsuccessful.

The best way to explain the wonderful world of sports betting is via real life examples. Hosts Brazil were the 8/5 (2.60) favourites to beat Germany in the semi-finals at the 2014 World Cup, while Joachim Löw’s men were 15/8 (2.88) underdogs in the fixed-odds betting. In the end, Germany made a mockery of that by thrashing Brazil 7-1 and going on to win the tournament. If you fancied Brazil to win the game, you could have placed a £20 bet at 8/5 and been happy to make a £32 profit. But spread betting would have seen you enjoy a much greater profit.

Let's say Brazil were priced at 0-0.2 over Germany in the Match Supremacy Index, which is a popular football spread betting market. This would indicate the traders thought it would be a close contest, but that the Brazilians held the slight edge. If you thought Brazil would win, you would have bought at 0.2, and if you thought Germany would win, you would have sold at 0. If you bought at 0.2, you would be hoping for Brazil to win by a heavy margin, while if you sold at 0 you would be hoping for a massive win for Germany. In order to calculate your profit or loss, your stake is multiplied by the difference between the price you bought or sold at and the actual result.

If you chose to sell at 0, you would have been jumping for joy every time another Germany strike sailed past the hapless Julio Cesar in the Brazil goal. In the end, Germany won by a six-goal margin, meaning anyone that sold at 0 would have seen their stake multiplied by six. A £20 bet would have generated a profit of £120.

If you had placed a fixed-odds bet on Germany to win that game, you might have sat back and relaxed after they took a commanding lead. But anyone that placed a spread bet would have been gripped to the end of the contest.

Andre Schürrle scored twice for the Germans in the latter stages of the game, and that made the difference between earning a 400% profit and earning a 600% profit, highlighting why spread betting is great for keeping you entertained.

Yet anyone that bought at 0.2 would have seen their losses increase with each Germany goal that went in, illustrating that spread betting offers the potential for greater risk and reward.

You are by no means confined to betting on who will win or lose a particular sporting event. When Tyson Fury took on Deontay Wilder in a heavyweight championship bout in LA, many experts thought he would be knocked out, as it was years since he had fought anyone of note and he was up against a man that had stopped every single opponent he had ever faced. Our traders predicted that the fight would last between 25.5-26.5 minutes, allowing you to buy at 26.5 if you felt it would go past that total or sell at 25.5 if you felt it would end before then. 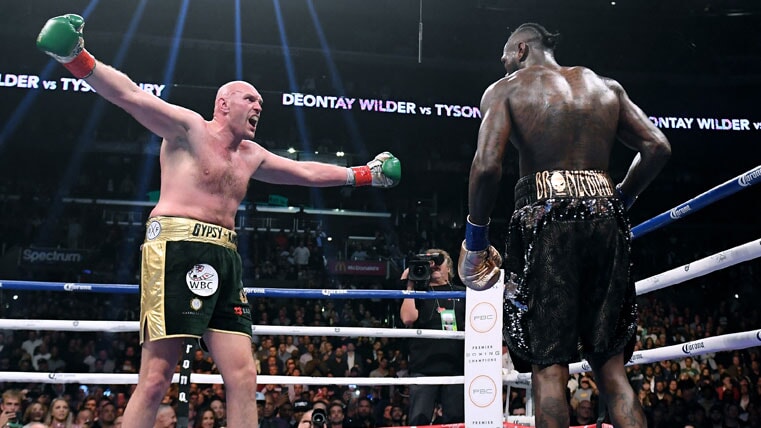 If you had placed a £10 fixed-odds bet on “over” in total rounds, you would have made a profit of around £9 to £10, so spread betting can be much more profitable. However, you can also rack up greater losses: anyone that sold at 25.5 would have lost 10.5 times their stake, so you need to analyse the market carefully before placing a bet.

Another interesting sports spread betting example is Super Bowl LIII, which saw the New England Patriots take on the St Louis Rams in Atlanta. It pitted the two most dangerous offences in the NFL against one another, and the Total Points spread was therefore set at 55-58. In the end, the game was something of a damp squib, as the Pats prevailed by a 13-3 on the back of a strong defensive performance.

That left a total of 16 points, so anyone that sold at 55 would have made a considerable profit. A £10 stake would have earned you a £390 profit. Which is vastly higher than the return you have got betting “under” on Total Points at a fixed odds bookmaker. Yet once again there is a flipside: anyone that bought at 58 would have lost 42 times their stake, which is much more than what they would have lost in a fixed-odds wager. Fixed-odds betting and spread betting both have a place and it is great to have the option to choose either one depending on how confident you feel about a particular match.

One of the greatest strengths of spread betting is the sheer range of markets it offers on a number of different sports. Sporting Index has a comprehensive Sports Spread Betting Training Centre and it explains all the popular spread betting options you can choose from on all the world’s biggest sports. It provides examples to help you understand the potential for risk and reward in each instance, and it guides you towards the spread bet that best suits you.